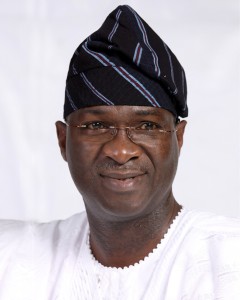 Lagos State Governor, Babatunde Fashola has appealed to the doctors and nurses attending to patients of the deadly Ebola Virus Disease (EVD) at the Infectious Diseases Hospital, Yaba, Lagos to return to work after going on a strike, abandoning the patients.
The action of the doctors and nurses was linked to reports of allegation of negligence levelled against them by relatives and associates of the dead nurse and other Ebola patients in the hospital.
Relations and associates of the female doctor and other health workers who contracted the EVD from the late Liberian-American, Patrick Sawyer, had, at a media briefing on Thursday in Lagos, accused the federal and state governments of neglecting the patients.
However, governor Fashiola quickly rose to the occasion to beg the striking health workers to get back to work, even as he described the reports as “disheartening.”
The governor cautioned the media against sensationalising reports on the disease, adding that such reports could cause serious panic among people.
“The report reaching me about two hours ago was that some of the health workers at the centre felt unappreciated and decided to stop work because of the media reports that they were not working effectively to save the lives of the victims.
“We do not need that at the moment. While we sympathize with the victims, the health workers are doing their best to care for the victims.
“My appeal to the people is that more health workers should sign up and what I was told by experts was that even if one is the best physician in the world, the person cannot enter the isolation ward. He or she has to be trained on how to kit up and how to get out of the centre and the training takes between five and seven days to achieve.”
The governor acknowledged however thet said media has been forthcoming in helping the government to sensitise the public about the risk and the precaution on Ebola virus and the necessary development of the outbreak of the virus in the country, cautioning the practitioners to be circumspect about how they publish and publicise comments on the matter.
“At the moment, I am only able to speak about this because I receive a daily briefing from our team and at the beginning of each day. And I act on what they tell me.
“We sympathize with the victims who were affected by the virus, we understand the trauma the family members are going through. But when all of that is taking into account, it is not true that we are not taking care of the patients.” [myad]