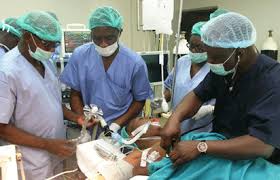 Nurses working in public hospitals across the country have threatened to go on nationwide strike if doctors are given preferential treatment in the area of payment of allowances and other benefits.
The doctors, on the auspices of Nigerian Association of Resident Doctors (NARD), have been on nationwide strike in the last three weeks, demanding that government pays death benefits to the families of 19 of its members who lost their lives during the fight against COVID-19, and movement of its members from the Government Integrated Financial Management Information System platform to the Integrated Payroll and Personnel Information System.
Reacting to the possible outcome of the doctors’ strike,  the National Association of Nigerian Nurses and Midwives (NANNM), warned the Federal Government not to pay resident doctors hazard allowances higher than those of its members.
“Don’t offend us while struggling  to satisfy resident doctors,” the nurses insisted, saying that while they are not contemplating embarking on any strike, the government should not satisfy striking members of  NARD without considering them, especially their hazard allowances.
The President of NANNM, Michael Nnatchi, who spoke on the issue said that the issue of hazard allowances had been politicized, claiming that the nurses deserved the highest pay in the health sector because of the highest exposure to hazards.
“This issue of hazard has been politicised.  What I mean by this is that the nurses are highly exposed to hazards. Is it exposure to diseases?   Is it kidnapping? which is almost every day, every week.
“For now, they (resident doctors) are on strike. I know truly we have been discussing it (hazard allowance) through the office of the honourable minister who honesty has been working very hard. He has a high level of concern on that issue.
“If not that  NARD went on strike, probably, by now all these issues would have been completed. That strike is more or less distracting both dialogues and negotiations.
“I will tell you, we have not threatened any strike, but the truth is that we are expecting to be paid the highest hazard allowance in the sector. So, if the NARD or doctors are asking for the highest pay, we are also asking for higher consideration; 80 per cent of our consolidated basic will not be bad. What we are passing through is much.
“If any special treatment is given to NARD and nothing is considered for us, I pray  that  they (government) don’t push us to go on strike  because if nurses are on strike for one day, you and I know the implication.
“Everybody deserves better pay, nurses are more valued abroad.”
Information has it that even other health workers, under the auspices of the Joint Health Sector Union (JOHESU), are also looking at the option of joining in the strike if the Federal Government failed to meet its pending demands.
Other unions in JOHESU are the Nigeria Union of Allied Health Professionals and Medical and Health Workers’ Union, the Senior Staff Association of Universities, Teaching Hospitals, Research Institutes and Associated Institutions as well as the Association of Medical Laboratory Scientists of Nigeria
A senior executive member and spokesman for  JOHESU, Olumide Akintayo, accused the Federal Government of trying to plunge the country into fresh health crises.
Akintayo said: “Federal Government is yet to pay our members COVID-19 allowances.
“There are lots of outstanding issues with the government. We have a pending five-point agenda. We are dealing with the non-adjustment of the CONHESS salary structure, implementation of several court judgments.
“Some members are also being owed salaries and as you know the country is still battling with COVID-19 and lots of our members have not been paid COVID-19 allowances.
“We have demanded that government pay our members and up till now, they are still being owed. We also talked about the adjustment of retirement age which is something that cuts across the health sector. The government’s refusal to meet these demands is causing fresh crises in the sector.
“Strike is an option certainly; we are responsible and we are sensitive to the yearnings of Nigerians, but strike is an option.
“We will continue to hope that the government reciprocates our mature gestures. Their actions will decide our reactions, but strike is an option.”
Source: PUNCH.