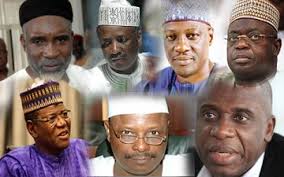 Leaders across the country converged on the Presidential Aso Villa, Abuja today to martial out strategies for the control and fight against the deadly Ebola Virus Disease.
The meeting which started at about 2pm dovetailed into late evening, after which the Lagos governor, Babatunde Fashiola, the governor of Enugu state, Silver Chime, minster of Health, Professor, Onyebuchi Chukwu, representative of the World Health Organization (WHO) in Nigeria and others briefed the newsmen.
They disclosed that as part of the efforts to tackle Ebola, laboratories have been earmarked in some parts of the country to test the disease.
The laboratories are located in Lagos, Asokoro in Abuja, Ibadan, the Redeamed University Lab on Lagos-Ibadan Express way just as more are to be opened in Enugu, Jos and Kano.
The meeting also reinfrced the decision of the ministary of health to prohibit transportation of corpses from one state to the other and from another country to Nigeria, adding that there could be waver if the ministary is contacted and it satisfies that such corpses are safe to be so transported.
They cautioned against being panicky about Ebola disease, observing that panick could be as deadly as Ebola itself, even as the meeting made it clear that medical officers would be well equipped with the best facilities as obtained in advanced technology to saveguard them. [myad]

Herbalist Kills Client While Testing Gunshot Charm In His Shrine