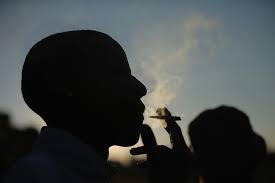 A student of one of the Universities in Nigeria has been rushed to Kuje general hospital, in the Federal Capital Territory (FCT), over sudden mental disturbance after participating in hemp smoking competition with fellow idling students.

Report reaching us at Greenbarge Reporters online newspaper indicated that the young man, after taking many amount of the hemp, began to roll on the ground and foaming from mouth.

According to information, the student was avoided by his parents, but was rushed to the hospital by his fellow students who have been doing nothing since the Academic Staff Union of Universities (ASUU) began the nation-wide strike.

Some medical staff in the hospital confirmed that the young man has been stuffed with overload of the substance and may lead to becoming mentally imbalanced.