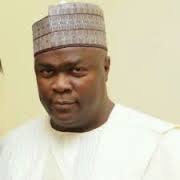 Senior Special Adviser to Vice President Mohammed Namadi Sambo on media and publicity, Alhaji Umar Sani has announced the decamping, by a member of House of Representatives (from Gwale local government constituency of Kano state), Hon. Bashir Husari and special assistant to Governor Rabiu Musa Kwankwaso on empowerment programme, Hajiya Maryam Umar Kofar Mata from All Progressives Congress (APC) to Peoples Democratic Party (PDP). Hajiya Maryam is also former APC Women Leader in Kano State.
In a statement today, Umar said that several other members of APC also left the ruling party in the state to join PDP and were received by Vice President Namadi Sambo.
Umar said that Namadi Sambo welcomed the decampees “to the shade provided by the Umbrella,” even as he told them that PDP umbrella is large enough to accommodate anyone interested in joining the party.
Namadi Sambo, who was in Kano on visit met with several stakeholders and enjoined them to reach out to the people and inform them of the achievements of the President Goodluck Jonathan led administration and the laudable programmes of the PDP.
The Vice President was said to have advised the decampees to work hard for the victory of the party in the forthcoming elections so that the party and the administration would continue to move the country forward.
Vice President Sambo, who described the PDP as “the party of Nigeria with the most people oriented programmes that has been transforming the socio-economic wellbeing of Nigerians in the right direction, also added that PDP is Nigeria, and Nigeria is PDP.
“If you go to every corner and the remotest part of Nigeria, PDP has a system in place.
Umar said that in their response, the decampees said they defected from the APC because the PDP and the administration of President Jonathan and Vice President Sambo have been delivering  more and better dividends of democracy to Nigerians through their Transformation Agenda.  They pledged to work tirelessly to move the party and the country to greater heights. [myad]