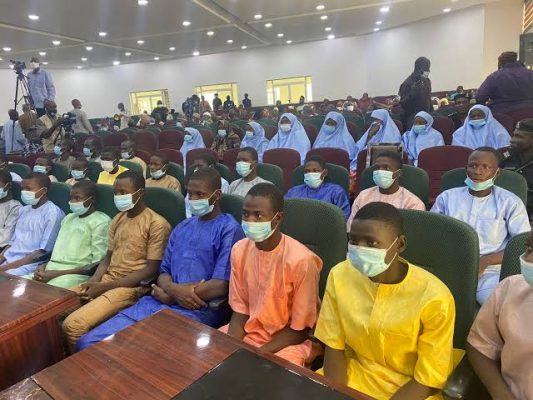 One of the just released students of Kagara Government Science College in Rafi Local Government of Niger State, Abubakar Sindi, has narrated how their captors, (the bandits), made them to trek from 2.30pm to 7pm far into a thick forest without food to eat and water to drink

In an interview shortly after meeting with the state Governor, Alhaji Abubakar Sani Bello today, February 28, the 20 years old student said: “the day we were kidnapped, we walked through the forest from 2:30pm till around 7pm.

“Unfortunately, all through our trekking, there was no time for us to rest, drank water or even eat anything because they tortured us to move fast or they will kill us. I was scared because the forest was thick. All through this time, we didn’t eat until they stopped us and asked us to sit on the ground.

”They gave us beans to eat after which they grouped us and asked that if any of us have parents who are either police or military; that was how they flogged us mercilessly so much that I thought I was going to die.

“In fact, I am not sure I can ever see any bush or forest and not remember this incident. I was so scared.”

See also:  Any Muslim Who Kills Christian Will Not Smell Paradise For 40 Years – Sheikh Gumi

Asked if he will still want to return to the school, he simply replied: ”I am not sure, I wi

Another student, 18 years old Suleiman Lawal said: “we suffered so much in the hands of the kidnappers. I have never experienced such in my life.

“In fact, I thought I was dreaming because the torture was too much for us. I am happy now that we have been freed. They fed us with beans once daily and they gave all of us five sachets of water to drink and that made us very weak. I don’t think I will like to go to that school anymore except there is enough security.”

Also a 18 years old Abubakar Adamu said: ”we suffered a lot. No food, no water and even when we were served water, it’s three persons to one sachet of water.”

Meanwhile, the state Commissioner for Education, Hanatu Saliu has expressing happiness over the safe return of the victims.

“Honestly, when they came it was not a good situation. For you to see them like this, we had to take really good care of them. They really suffered in the hands of the kidnappers.”