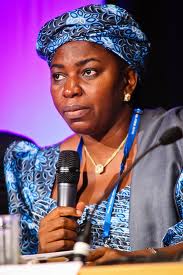 Minister of water resources, Mrs. Sarah Reng Ochekpe has given details of how the former Petroleum Trust Fund (PTF), headed by the current Presidential candidate of All Progressives Congress (APC), General Muhammadu Buhari abandoned a water project at Okpella in Etsako Local Government Areas of Edo State even as she admitted that the government of President Goodluck Jonathan has also not been able to complete the project.
The minister reacted in a statement today to what she called “a very unpleasant publication” in some national newspapers alleging to have been made by the Governor of Edo State, Adams Oshiomhole to the effect that PDP – led Federal Government siphoned N800 million meant for the project. The governor was said to have alleged that record at the Federal Ministry of Water Resources, Abuja, shows that the project had been completed without single water pipe laid.
The minister said that there is no such record or claims by the Federal Ministry of Water Resources that the water project in Okpella is completed or in use, even as she admitted that “the Okpella Water Supply Project was awarded by the defunct Petroleum (special) Trust Fund (PTF) in December 1998
“For the avoidance of doubt, the Okpella project is one of the failed projects of the current flag bearer of the APC – General Muhammadu Buhari when he was the Chairman of the Petroleum Trust fund (PTF).”
Mrs. Ochekpe said that her ministry, at the inception of this administration, undertook a nationwide assessment of several abandoned projects in the water sector, including the Okpella water supply project, and documented them properly for completion by the Federal Government of Nigeria.
“You may wish to note that some of them have been completed, such as Ilesha Dam in Osun State, Ogwushi-Uku Dam in Delta state, among others across the country.
Admitting that the Okpella water project was not one of those that have been completed by the ministry, the minister described Oshiomhole allegation as spurious, adding that the allegation had been trumped up in the past and reported to the EFCC which carried out investigations and discovered that there are no such records of completion in the Ministry, nor were there any funds appropriated and released to the tune of N800m and expended by the Ministry on the Okpella water supply project.
“If Governor Oshiomhole wants to undertake water projects, especially for the people of Edo State, which is his statutory responsibility any way, let him go ahead and do so without joining issues with the PDP led Federal Government.”  She made it clear that the role of the Federal government in the provision of water to rural communities is interventionist not statutory, even as he asked Governor Oshiohole to brace up to his responsibilities and provide water for Edo people.
“Governor Oshiomhole needs to know that no Government of Nigeria over the years has demonstrated as much political will and delivered on its promises in the water sector, like the President Jonathan led Federal Government.  You may wish to check the scorecard of the Ministry.
“The Federal Ministry of Water Resources therefore demands that the Comrade Governor use the same media to retract his unfounded allegations against the Federal Government of siphoning N800m that never existed.” [myad]