Home NEWS How I Hit Kidnapper, Dodged Gunshot And Escaped To Invite Soldiers –... 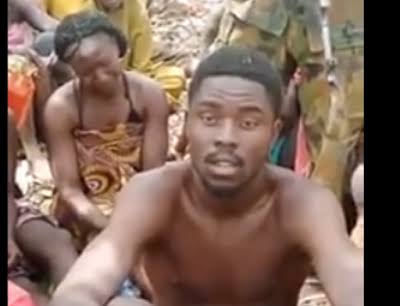 “When we reached there, they asked us to lie down. One of the gunmen guarding me suddenly ran to pursue one of the girls who ran way. As the commotion ensued, I ran away. While trying to escape, I hit one of them down with my two hands and then fled. As I fled, he started shooting towards my direction.

“Luckily I escaped unhurt to report the matter to the soldiers who immediately rushed to the scene.”

This narration was given today, March 13, by one of the student of Federal College of Forestry Mechanization, Afaka, Igabi Local Government Area of Kaduna State, Zakari Musa.

He said about 40 bandits stormed their school and attempted to abduct hundreds of them.

“We were sleeping when they stormed into our dorm and started chasing us out. They asked us where is the female hostel.

Soldiers of the Nigerian Army had in the early hours of yesterday, March 12,rescued 180 people, many of them are students of the Federal College of Forestry Mechanization, Afaka, Igabi Local Government Area of Kaduna State.

The state Commissioner for Internal Security and Home Affairs, Samuel Aruwan, confirmed the rescue of 180 students in a statement on Friday. The bandits however succeeded in abducting 39 students.

According to the statement, the armed bandits in large numbers, attacked the institution at around 11:30pm on Thursday and kidnapped several students.

The armed bandits broke into the institution by breaching a perimeter fence. They then encroached about 600 meters to attack the first facility.

“The Ministry of Internal Security and Home Affairs on receiving a distress call, alerted the 1 Division Nigerian Army and the Air Training Command of the Nigerian Air Force.

“Troops of the Nigerian Army immediately moved to the school and engaged the armed bandits accordingly.”

Kaduna Describes NLC’s Strike As Exercise In Futility, Says No Going Back On Sack...