Home NEWS How My Enemies Sent Me Out Of Government House With Juju –... 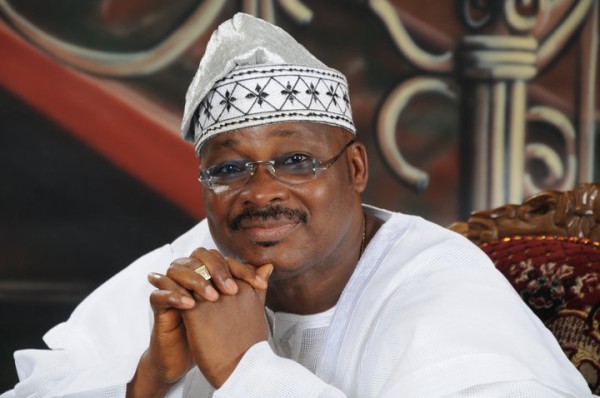 Governor Abiola Ajimobi of Oyo State has narrated how his enemies who wanted him dead led him to vacate his official quarters in the government house and then relocated to his private residence in Ibadan, the state capital. According to him, his un-known political enemies directed a dangerous Yoruba Juju, called ebo at him.

Governor Ajimobi who spoke in Ibadan during the eighth-day Fidau prayer for the late Chief Imam of Ibadanland, Sheikh Baosari Haruna, said that before the just-concluded elections, some desperate politicians did their best to send him out of Government House at all cost through many devilish means.

“They first came to you, Alfas (Muslim Scholars), for you to give them prayers that will send me out of office, but my own Alfa prayers superseded that of these desperate politicians. Every morning, I always go out on exercise. If you know the Government House very well, it has many interchange, popularly called `orita’, I see all kinds of sacrifices (ebo) placed in all these junctions.

“Worried by these developments, some of you my Alfas here advised me to move out of the Government House to render their evil plots useless.”

Ajimobi said that his reason for fleeing his official quarters is contrary to tales spread by opponents that he packed out of Government House because he was afraid of imminent defeat as no governor had ever been reelected for second term in the history of the state.

The governor said he had to leave “to thwart the evil plots of these desperate politicians”.

The governor, who is still basking in the euphoria of breaking the jinx of being the first governor to be elected for second term in the state, thanked all spiritual leaders in Oyo for their prayers for him and the state.

“It is only Allah who shamed my detractors through your prayers for me and those I made in Saudi Arabia where I had the privilege of entering inside the Kaabah,” he said.

The elated governor asked the Islamic scholars to select 10 of them that would join him to Saudi Arabia soon to perform the lesser Hajj ( Umrah) to thank Allah for His mercies on him and the state.

He thanked the people of Oyo State for once again reposing their confidence on him by voting him in as governor of the state for another four years. [myad]