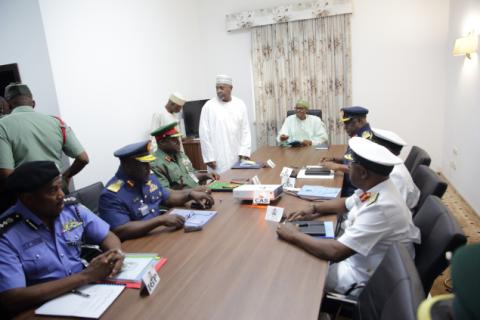 The Permanent Secretary in the federal ministry of defence, Alhaji Suleiam Aliyu Numan has described how President Muhammadu Buhari updated and enriched the strategic plan of the Nigeria military leadership on the way to bring the activities of Boko Haram to an end in a shortest possible time.

Numan who answered reporters’ questions shortly after the President ended a meeting with service chiefs at the Presidential Villa today remarked: “Nigerian armed forces are very ready. We briefed him (President Buhari), but one most interesting thing about it is that we are going out much happier because he has shown to us he is still a soldier.

“He has updated and enriched our strategic plan and we are happy.
“We briefed him on how far we have reached on that; on that one again he has given us some additional assignments but very soon the centre will be on. I want to assure Nigerians that with what we have come out from this meeting, we are very enthusiastic that the issue of Boko Haram will soon be over.
“I as a permanent secretary, also feel like going to fight the war because he has given us hope and we have seen peace and security in the very near future.”
The permanent Secretary also said that the Joint Multi National Task Force on Boko Haram had restrategised to combat terrorism in the sub region, adding: “now, we have come as a united front. We have Chad, we have Cameroon; we have Benin; we have Niger. We have all restrategised and coming out with one strategy that we are going to use to address Boko Haram, unlike before.” [myad]