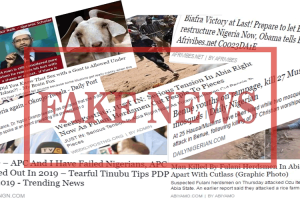 Some “respected” online publications fell prey to fake news purveyors yesterday, July 23, thereby throwing Nigerian and foreign readers into confusion.
The news item, which surfaced yesterday and purportedly signed by the special adviser to the President on media and publicity, Femi Adesina, was on President Muhammadu Buhari’s acceptance of the Senate recommendation to dissolve the Interim Management Committee of the Niger Delta Development Commission (NNDC).
The fake news, which went viral, with prominent news media in country displaying it on their websites, was subsequently disowned by Femi Adesina.

The fake news, titled: “Special Goverment Announcement”, goes thus: The Federal Government is in receipt of the Senate Recommendation that the NDDC IMC be dissolved and
ii. that the NDDC be returned to the Presidency for proper supervision.

The Government set up a technical Committee to study this recommendation and advise it which committee has turned in its Recommendation.

Federal Government hereby accepts the Recommendation of the Senate and accordingly:

1. The President has hereby dissolved the NDDC IMC. The affected officers are to hand over to the most senior civil servant under them.

3. The NDDC is hereby returned to the Presidency for proper supervision.

4. The President assures Niger Deltans that the forensic Audit of the Commission will continue unhindered.

And in a statement today, July 24, titled: “fake news on NDDC attributed to me, Femi Adesina said: “a statement purportedly signed by me has been making the rounds that the Federal Government has dissolved the Interim Management Committee of the NDDC. Merchants of fake news in action. The communication did not emanate from the media office of the President. Please ignore.”