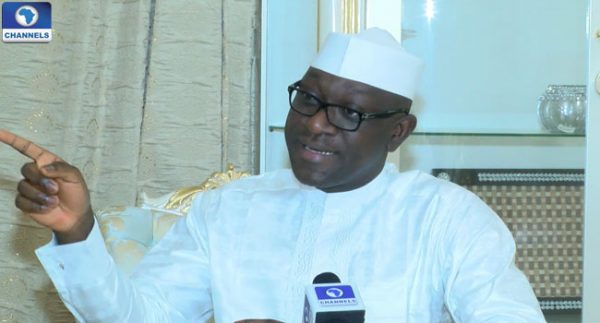 Former member of Federal House of Representatives, Abdumumini Jubril has made it clear that he will continue to remain a radical.
“Nothing has changed about me and nothing will change. I will  continue to be the person that I am; the frank and very blunt and continue to contribute my quota towards the development of the country.”
Jubril, who spoke to news men shortly after an audience with President Muhammadu Buhari today, December 31, said that it is not true that some people in Kano are not happy with him in his quest to return to the National Assembly.
“It’s the usual rumour. We are working harmoniously and I’m sure that the rerun will be very successful, not only in Kano for the APC, but all over the country where rerun will be held on the 25th.”
He stressed that his relationship with Governor Umar Abdullahi Ganduje of Kano State is cordial, denying the fact that he had come to seek for the intervention of President Buhari.
“My relationship with my governor (Ganduje) is cordial. He has always been a father and nothing has changed.
“I had audience with Mr President and a regular audience to discuss with him all the achievements during the year, to commend him on the progress we’ve made in the economy, fight against corruption and the issue of security in the country and to look at issues having to do with massive infrastructural development going on across the country. We need to sustain it
“The agricultural revolution going on, we need to sustain it. The fight against insurgency and the successes that have been recorded and of course, the cordial relationship that now exists between the executive and the legislature.
“By and large, it’s been a very good year for the President and the government and I think we all have the responsibility to commend him. That’s what we discussed, essentially.”