Home NEWS I Will Reciprocate Your Votes With Good Governance, Yahaya Bello Promises 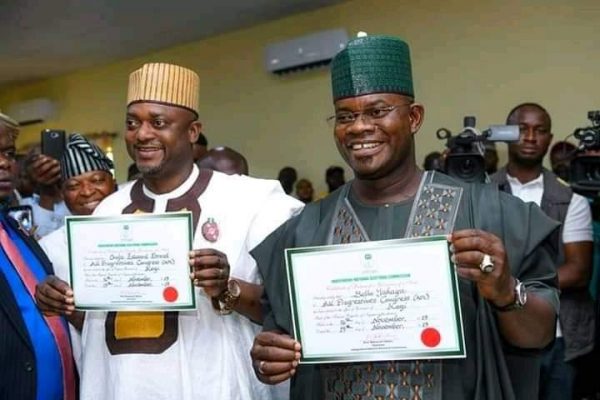 Governor Yahaya Bello of Kogi State has promised the people of his renewed commitment to good governance as a way of reciprocating the massive votes they gave him for a second term, in the last Saturday, November 16 election in the State.
The governor, who received the certificate of return as governor-elect from the Independent National Electoral Commission (INEC),  along with his deputy governor-elect, Edward Onoja, thanked the people of the State for his re-election even as he solicited their cooperation and continued support.
He assured that no axis of the state would be left out in the new dispensation, irrespective of ethnic or political affiliations.
Governor Yahaya Bello vowed to work seriously with the security agencies to fish out perpetrators of violence that greeted the November 16 governorship polls either before, during and after the election.
Zonal National Commissioner of INEC for Kogi, Niger, and Kwara States, Mohammed Haruna, who presented the certificates to them today, November 21, said that it marked the beginning of a new era in the state.
This was even as the Chairman of Interparty Advisory Council (IPAC) in Kogi, Ibrahim Itodo, called on Governor Yahaya Bello to unify all as the state’s number one citizen.
Yahaya Bello and Onoja will be sworn in on January 27, 2020.

We Lost 2 Officers, 2 Expatriates, 2 Others To Unknown Gunmen In Kogi