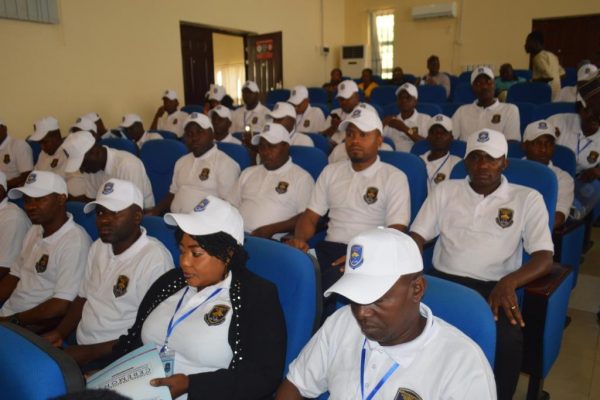 A total of 246 officers newly recruited by the Independent Corrupt Practices and Other Related Offences Commission (ICPC) have graduated from the Nigerian Security and Civil Defense (NSCDC) training academy after a six-week course.

The Chairman of the Commission, Professor Bolaji Owasanoye, who was the Reviewing Officer at the Passing Out Parade, which held at the NSCDC training academy, Sauka in Abuja, said that the new staff would bridge the human capacity gap being faced by the Commission.

Professor Owasanoye said that the recruitment of the 246 staff, comprising senior and junior cadres, out of over 400,000 applicants, would enable the Commission to tackle the problem of corruption that has been bedeviling Nigeria.

“Consider yourself lucky to have been selected by the Commission out of the over 400,000 that applied for the job.

“Your conduct must be above board because the ICPC mandate demands it. Integrity and discipline are essential character traits you must have to excel in your career.

“You must make integrity and honesty your watchword.”

The chairman said that as the country is battling with the menace of corruption posed by illicit financial flows, internet fraud among others, they should be seen to be above board, warning that defiant staff would be shown the way out of the Commission.

“You have the herculean task of ridding Nigeria of the menace of corruption. This board and management have zero tolerance for corruption, indiscipline, and other forms of official malfeasance. You must strive to always live above board. Any act of disloyalty to the Commission will not be tolerated and the person will be shown the way out.”

See also:  Buhari Wonders Why People Allow Themselves To Be Used To Destabilize Own Country

The Commandant-General of NSCDC, Dr. Ahmed Audi, said that the new staff have been rigorously trained and equipped to function as anti-corruption officers.

Dr. Audi, who was represented by the Deputy Commandant, Nnamdi Nwenyi, said that the training has churned out well cultured, disciplined, and loyal staff for ICPC.

The camp commandant, Wellington Nkemadu, who spoke to newsmen on the side of the event, gave the assurance that the new staff would perform any task assigned to them having undergone six-week rigorous military and technical training.

He said that the senior cadre would be moved immediately to the Anti-Corruption Academy of Nigeria, (ACAN), the training arm of ICPC for another six-week training, focusing on technical and core mandates of the Commission, while the junior cadre will remain in Sauka for another two weeks.

The event, which witnessed displays such as a parade by the graduating officers in slow and quick march, unarmed combat and other non-regular military drills also featured the presentation of awards to four outstanding officers.

Those awarded for outstanding performances and best behavior are the Course Senior, Akanmode Olayemi, Aisha Mohammed and the two parade adjutants; Ahmed Mohammed and Mariam Suleiman.

Akanmode Olayemi who spoke after the parade said that the training had toughened her to cope with the rigors of anti-corruption work, while also admitting that they had been adequately prepared as integrity officers who would not condone any act of corruption.