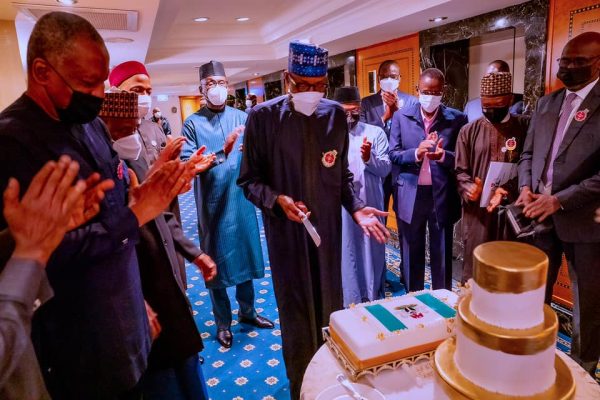 President Muhammadu Buhari has shown his desire to return to his farm in Daura, Katsina State after handing over to his successor in 2023.

Speaking at a surprised reception for him today, December 17 in faraway Turkey, on his 79th birthday, Buhari said: “I look forward to the year 2023 when I finish, to go home to take charge of my farm. Between now and that time, I will do the best that is possible to advance the interest of the nation and its people, and carry out my duties as prescribed by the Constitution.”

In Istanbul, Turkey, Minister of Foreign Affairs, Geoffrey Onyeama, had led other Ministers in the entourage to celebrate the day for the President.

As he stepped out of his suite moving to the meeting room, President Buhari met a surprised lineup of the Nigerian delegation who broke into a chorus, as they began chanting “Happy Birthday, Mr. President.”

A birthday cake decorated in Nigeria’s national colours of green-white-green was presented to the President, which he symbolically cut.

The surprised Buhari said: “I thought that being away from Abuja I will escape these things. The Guards Brigade had written to tell me what they wanted to do on this day. Now here you are doing this far away from home.”

The President, who later chaired a planning meeting with officials in his delegation and thereafter drove to the Dolmabahce Palace for a meeting with his Turkish counterpart, Tayyip Recep Erdogan, said that he will put in his best for Nigeria until the last day.

The Minister of Foreign Affairs who spoke on behalf of the delegation and the Ambassador of Nigeria to Turkey, Ismail Yusuf Abba, congratulated the President on the good work he is doing for the country and wished him a happy birthday, many healthy years ahead and the energy to give his best to the nation.

Minister Onyeama noted in particular that the President continues to have a good run with his health, getting better and more active with time.