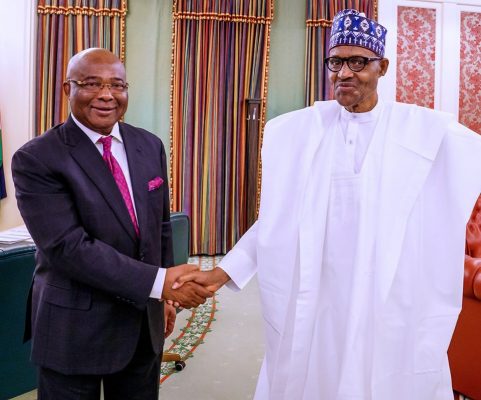 Governor Hope Uzodinma of Imo State has landed in Aso Rock presidential villa Abuja with cap in hand, begging President Muhammadu Buhari to save his state from collapse financially.
Governor Uzodinma, who spoke to newsmen today, February 20 shortly after a visit to the President, said: “Imo State, you know, is not solvent. Imo State is financially distressed, the roads are so bad, security situation is rough, education is backward and a lot of things to do and we don’t have the money.
“So I have come to request the kind intervention of Mr. President to at least refund some monies spent on some of the Federal roads in Imo State before my arrival so that we can address some pressing issues like pension arrears, salary areas so that we can get back the people, recover the people first before we begin to talk of infrastructure.”
The governor said that though consultants are still working on the exact figure but that so far, “we have computed the monies in the neighborhood of N32 billion and my first application to Mr. President, I articulated those ones that will have prior approval before construction and a total sum of N12 billion has been recorded and I have submitted the request and in his magnanimity, he has assured me that he will look into it very considerably.”
He said that wherever the money he is requesting for can take the state government to, it will be a lift even if for palliative purposes.
“Whatever we will be able to achieve with whatever intervention given to us by Mr. President, it does not necessarily mean that all those monies owed to us will be given to us.”
The governor said that he would be wasting time and the few resources at his disposal to be looking for who and what caused financial hopelessness of the state.
“However, whatever may be the case, we will be prudent in the way we manage whatever will be given to us in terms of intervention.
“Today is not for me to begin to discuss the activities of past administrations: time will come when we shall discuss in a very holistic manner that you will get every information you need.”
He promised to look into how to make the Internally Generated Revenue (IGR) worthwhile, saying: “we will look for what are the peculiarities on ground and do those things that will be over tasking the citizens for the purposes of raising money.
“We will do what will be a win win situation between the government and the people of Imo State in such a manner that those who are paying the money will not suffer from harsh environment. It will be willing to support the government and government also will not be losing monies.
“For instance, if you have these petty traders, people whose incomes are between zero to one hundred thousand nara a month, running after them to pay tax, for me it does not make any strong sense. We should look at our tax regimes and policies and see how we can get a review to some of them.”