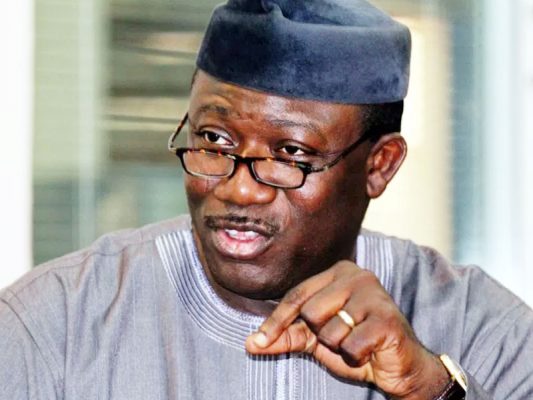 Chairman of the Nigeria Government Forum, Dr. Kayode Fayemi has given assurance that full implementation of financial autonomy for the Judiciary and State legislatures will commence, latest May this year.
speaking to newsmen today, April 19 after a meeting of stakeholders on financial autonomy for the judiciary and legislature, Dr. Kayode, who is Governor of Ekiti State said “not later than May, you will start seeing the implementation of the agreement that we have reached.”
He said that the implementation of the financial autonomy had never be an issue because governors, speakers and judges are on the same page, as far as this issue is concerned.
“We just emerged from a meeting with the Solicitor-General of the Federation, the representatives of the judiciary, the representatives of the Conference of Speakers, and House of Representatives and we are on all fours. An agreement has been reached.
“First, the issue is about implementation. There has been no objection from governors on judicial and legislative autonomies, as a matter of fact, it would not have passed if governors were not in support in the first instance, in the state Assemblies.
“So that issue has been fully and holistically addressed, but we don’t just want to agree to something on paper without working out the modalities for implementation. Thankfully, the meeting we have just emerged from, with the Chief of Staff to the President chairing, has worked out the modalities to the satisfaction of all parties.
The NGF stressed that implementation will commence as soon as the final document that is being cleaned up emerges, “that is preparatory to implementation.
“We are not going to put a timeframe in the air, but it will be implemented as soon as possible, definitely not later than the end of May 2021.”
The governor then called on the judicial workers to call off the strike and return to work in the interest of the nation.
He said that all the parties, from the President, through the Chief of Staff, are at a position “where whether you speak to the Conference of Speakers’ chairperson or you speak to me or you speak to the representative of the judiciary or you speak to the Solicitor-General of the Federation, you will hear that we’re speaking with one voice on the implementation.”