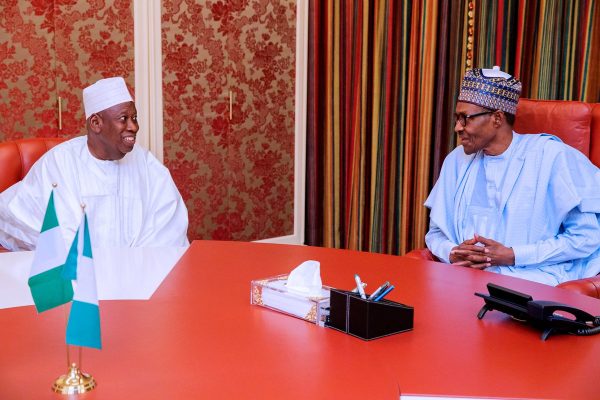 Governor Abdullahi Umar Ganduje of Kano state has said that people in other parts of the North have been flooding the state to escape lingering insecurities in those states.
“Kano is a mega city and because of security situation, many people are coming into Kano now, traffic is increasing, buildings are increasing because people from the Northeast, people from even Northwest are coming to settle in Kano.”
Governor Ganduje, who spoke to news men today, March 21 at the presidential villa in Abuja, gave a run down of measures his government had taken to make the state the most peaceful in the country, despite the influx of people.
“We introduced the command and control centre; the CCTV where we are viewing the whole Metropolitan Kano. We have the most powerful tracker vehicle and equipment in Kano.
“Falgore Forest where bandits usually inhabit, we said no, not in Kano State. We established a military training ground in Falgore Forest and therefore bandits cannot inhabit it. Our border with Kaduna, we have a forest and where we are establishing ruga programme, we discussed with nomadic Fulani, they agreed to be settled there. In fact, other Fulani are even coming.”
Ganduje said that his government had established a security training institute where young men and women are being trained on community policing.
“Even yesterday, I graduated 200, while 500 are under training there, with the advice of the security agencies in Kano.
“All these efforts are in order to keep Kano in peace, apart from other policies in education, free and compulsory education, reforming the Almajiri system.”
The Governor, who described the lingering insecurity in many parts of the country as unfortunate, expressed gratitude to the security agencies for their full cooperation.
He said that his government is conscious of the traffic mess into which the state capital can be thrown and had therefore, commissioned experts to design interchange system for the state.
“We revised the master  plan of Kano state and all those areas where we have holdups, we either build underpass or we build a bridge, and now we have resorted to putting the three together in one place; that is flyover, bridge, and underpass, all at one point so that there will not be any traffic jam.”