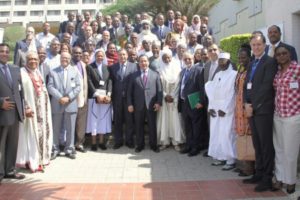 The second African Union Interfaith Dialogue Forum has called on African nations to adopt education on inter-religious and intra-faith dialogue as means for attaining peace and development in the continent.

The Forum is made up of religious leaders, policy makers, scholars and representatives of civil society organisations from no fewer than 30 African countries.

Addressing news men after the conclusion of the two-day forum that was jointly organised by the Citizens and Diaspora Directorate (CIDO) of the African Union Commission and the International Dialogue Centre (KAICIID), the summit approved a Declaration and a Plan of Action on their joint work in education, partnerships, media and development.

According to the communiqué released at the end of the summit, which recently took place in Abuja, Nigeria,  2nd AU Interfaith Dialogue Forum “acknowledges the need to build partnerships between African Union, interfaith and faith-based organisations, as well as religious and traditional leaders to more effectively implement the African Union’s Agenda 2063 and the UN’s Sustainable Development Goals in Africa. As part of the Action Plan, the African Union will support a Steering Committee to establish a 10-year interfaith development agenda for all African Union member states.”

Representative of the African Union Commission, Amb Jalel Chelba from CIDO, notes: “This platform is an example of a functional alliance between political and religious leaders in service of the African continent who seek to direct efforts towards practical action by preserving the values of respect, plurality, diversity, religious tolerance and peaceful coexistence. And this forum is an essential part of the peaceful and timely resolution of conflict in Africa attained with dialogue and not the use of guns.”

On his part, the Secretary General of KAICIID, Faisal bin Muaammar, declared: “Religious leaders need to be heard by policymakers and to engage constructively with them to share joint concerns and learn from each other. They need to be able to collaborate, not only with each other, but with all sectors of society.The steering committee launched today is a vital instrument in that endeavour. It fosters among other relations, Interreligious dialogue, which is an integral component in achieving the Africa Agenda 2063, global strategy to optimize use of Africa’s resources for the benefit for all Africans.”

Among the recommendations in education, the Action Plan calls for promoting a culture of peace and reconciliation through the teachings of the different holy books in all places of worship and enhance media coverage, the Action Plan recommends training for journalists covering religious issues. A platform that encourages the “soft power of religion” is to be launched to prevent violent extremism, the instrumentalisation of religion and religiously motivated violence is also considered.

The summit came to a successful conclusion with the election of a Steering Committee of two years’ term to support and strengthen the process of interreligious and intercultural dialogue within African countries and communities. [myad]