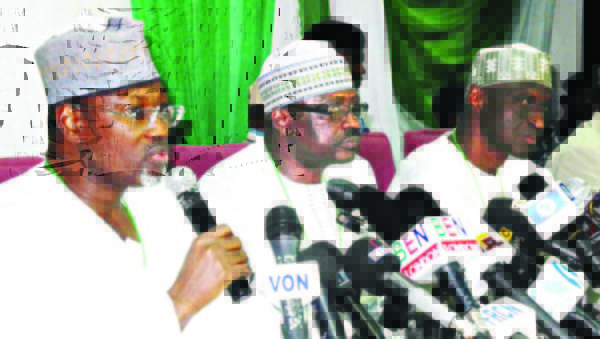 Chairman of the Independent National Electoral Commission (INEC), Professor Attahiru Jega has suggested the introduction of the Election Risk Management (ERM) in the election management of other African countries, against the backdrop of its successful use in the Nigeria’s 2015 general elections.
According to Jega, the ERM tool had afforded the electoral risk mapping to generate data and do analysis to support a range of activities targeted at either mitigating risks or taking proactive measures in ensuring the conduct of free, fair, credible and especially peaceful elections.
The INEC Chairman made the recommendation yesterday, at a workshop on ERM post-elections analysis organized in collaboration with International IDEA and African Union, held at INEC’s Electoral Institute in Abuja.
While encouraging the use of the ERM tool due to its effectiveness, Professor Jega expressed INEC’s readiness “to share experiences and willingness to participate in whatever role it can, in order to ensure utilization of its objective in expanding the organization of the tool in the African continent”.
The INEC Chairman was full of appreciation to the Embassy of the Netherlands, the African Union and International IDEA for their support towards deployment of the tool and also the successful conduct of the 2015 general elections.
He urged participants at the workshop to contribute ideas in terms of how to continually improve the framework and the methodology of preventing conflicts and violence in elections.
Earlier, the International IDEA Africa Programe representative, Professor Adebayo Olukoshi, paid tribute to the INEC Chairman for his exemplary leadership qualities and for “raising the face of the country.”
He urged that the Nigerian experience be used as a template to share with other African countries.
On his part, the representative of the Embassy of the Netherlands, Maurice Paulson, described the 2015 general elections as peaceful and commended the INEC Chairman for the success of the elections.
He emphasized the role of the deployment of the ERM tool in mitigating violence in the 2015 general elections, adding that his country will encourage its deployment in other African countries. [myad]