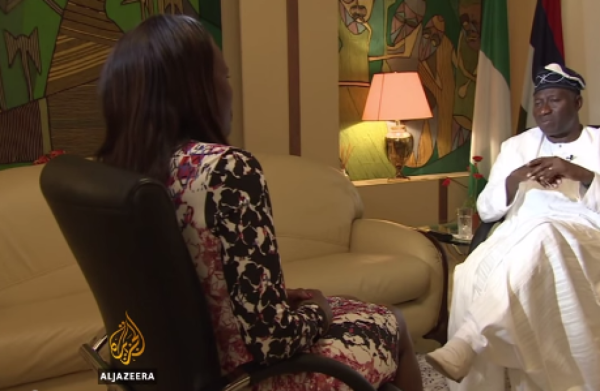 President Goodluck Jonathan has insisted that most of what are perceived to be corruption in Nigeria are mere cases of petty stealing by government officials.
The President who had in one of his media chats said that stealing “was not the same thing as corruption” said that there has been no evidence to show that the government funds that have been declared missing were actually stolen, saying that it was just that such funds were not properly balanced.
President Goodluck Jonathan who spoke in an interview with Aljazera last night said that the perception that Nigeria’s corruption has worsened under his leadership is an overblown assessment with political undertones.
According to him, despite the country’s position in the global corruption perception index, the perception that corruption has worsened under his administration is inaccurate.
President Jonathan insisted that even with Nigeria’s dismal anti-corruption record, both globally and in Africa, its perception both within and outside the country was blown out of proportion for political gains.
“Yes, people talk about corruption now, because it has become a political issue. And when you promote something to the level of politics, normally it is blown out of proportion.
“Yes, we have corruption cases, no doubt about that. Yes, we have cases of people stealing, no doubt about that. I always said call a thief a thief. I am not saying that in Nigeria we do not have these elements of corruption, or stealing.”
President Jonathan referred to the controversy triggered by the former Central Bank of Nigeria governor, Lamido Sanusi’s claim that $49.8 billion oil money was unremitted by state-owned national oil company, the Nigerian National Petroleum Corporation, between 2011 and 2012.
He said that after various reconciliations by both the National Assembly, the Federal Ministry of Finance and the NNPC, the amount that remained unaccounted for was reduced to $20billion, even as a forensic audit by PriceWater HouseCoopers ordered by government turned in a report in 2014 that government has refused to make public.
The President said he was yet to come to terms with what the real figures involved in the allegation were, adding: “if you start from my former CBN governor, who said initially that $49.8billion was missing. $49.8billion is a lot of money.
“What is the budget of this country for God’s sake? Our federal budget has been three point something trillion, that’s roughly on the average $18 to $20 billion a year.
“And you are saying we lost $49.8 billion. If we lose $49.8 billion, the federal and state governments will not pay salaries. I don’t know how he came by that figure.
“The next moment, he changed from $49.8billion to $12billion. The next day it was $20 billion. Up to this time, I don’t know which is the correct accusation,” he claimed.”
According to the President, the Senate employed the services of financial consultants to probe the allegation, and it turned out that only about $2 billion was found not to have been properly balanced.”
In 2014, Transparency International ranked Nigeria was ranked 136th out of 175 countries and territories, with a score of 27.
According to TI, a country or territory’s score indicate the perceived level of public sector corruption on a scale of 0 (highly corrupt) to 100 (very clean).
The latest ranking, though better than its ranking of 144thout of 177 countries and territories, with a score of 25, recorded the previous year, still categorised Nigeria among some of the world’s most corrupt countries, including Cameroun, Kyrgyzstan, Lebanon and Russia.
South Africa, ranked the second largest economy in Africa, fared far better, with a ranking of 67 and a score of 44.
Also, the Thabo Mbeki High Level Panel report on Illicit Financial Flows from Africa noted during the recent summit of the African Union Heads of State and Government in Addis Ababa that Nigeria accounted for about 68.1 per cent of the cumulative revenue Africa lost between 2001 and 2010 through corruption and illegal transfers. [myad]