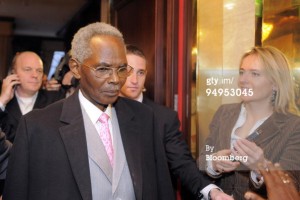 President Goodluck Jonathan has praised God for making the former Nigeria minister of Petroleum resources, Dr. Rilwan Lukman, who just passed on at the age of 75 in Austria, a Nigerian.
This is even as former Vice President Atiku Abubakar described the departed Rilwan Lukman as the best oil minister Nigeria ever had “given his unmatched knowledge of the industry and the integrity with which he ran the ministry.”
In a statement by his special adviser on media and publicity, Dr. Reuben Abati, President Jonathan said: “We give thanks to God Almighty for bestowing him on the nation and for the great intelligence, integrity, competence and humility with which he distinguished himself in all his national and international assignments.”
President Jonathan said that he received the news about the death of Dr. Lukman with sadness and a feeling of great national loss.
The President comforted his family, the Government and people of Kaduna state, as well as his friends, associates and all those he mentored over the years in the domestic and global oil industry.
The President said that he shared in their sorrow as they mourn the brilliant engineer, technocrat and administrator who spent almost all of his working life serving his country and the global community in various capacities, including Minister, Special Adviser, Secretary-General and President of the Organization of Oil Exporting Countries (OPEC).
The President acknowledged the significant contributions which late Dr. Lukman made to the development of the country’s oil and gas industry and his service with acclaimed distinction as the nation’s representative at the helm of OPEC affairs for many years.
In his statement, issued by his media team in Abuja, former Vice President Atiku recalled that Lukman’s contribution to the management of the nation’s oil and gas sector provided the impetus for his elevation as Secretary General of Organization of Petroleum Exporting Countries (OPEC).
Atiku who is also the Turaki Adamawa described his death as a monumental loss and prayed that Allah will grant his family and the nation the fortitude to bear the loss. [myad]