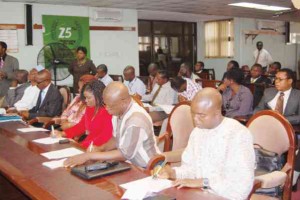 Journalists in Nigeria have advised the Federal Government to enlist the support of community leaders across the nation in finding lasting solutions to the problem of insurgency, particularly in the North East and the South East.
This was contained in a Communiqué at the end of National Executive Council (NEC) meeting of the Nigeria Union of Journalists (NUJ), the umbrella body of the professionals, held on Friday in Owerri, the Imo state capital.
The journalists wanted a more robust response from all stakeholders, including NGOs, Development partners and other donor agencies in rebuilding and re-integrating victims of insurgency, especially in the North East, in order to discourage those who have moved to their communities from returning to the IDP camps.
The Communiqué which was signed by the national secretary of NUJ, Shuaibu Usman Leman asked the Federal Government to specifically address the state of insecurity,especially the rising cases of kidnapping that is fast spreading to all parts of the country.
The NUJ appealed to Nigerians generally to support the armed forces in their effort at containing the insurgency in the country.
This was even as it wanted men and women of good will to prevail on the youths of the Niger Delta to desist from further destruction of national assets and that the Federal Government should give adequate attention to the legitimate developmental needs of the oil producing areas.
The Union wanted the government to declare state of emergency on Nigerian roads to forestall further decay, loss of lives and property on highways.
“That Government at all levels should work to improve relationship with journalists covering their activities, especially in ensuring access to information at their events.
“That the Federal Government should expedite the process of reviewing upward the present minimum wage which is no longer in tandem with prevailing economic realities in the country.
“That the judicial system in the country should be strengthened to end impunity with regards to crimes against journalists.”
Members of the NEC endorsed the report of the caretaker committee of Osun State Council and approved that elections be held in January as planned. This was even as it advised that state governments should be encouraged to continue to support and assist the union in its activities.
It expressed gratitude to the Imo State Government and Governor Rochas Okorocha for facilitating the hosting of the NEC meeting in Owerri.
“NEC also appreciates the Imo State Council and Zone C of the Union for a good organization of the NEC meeting. [myad]