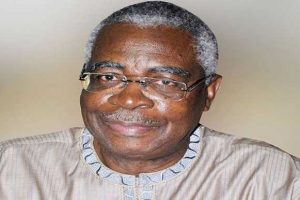 Socio-cultural organization of Jukun people, Jukun Development Association of Nigeria (JDAN) has thrown its weight behind its elder kinsman, Lt General Theophilus Yakubu Danjuma (rtd), who at the weekend, called on his people to rise and defend themselves against rampaging Fulani herdsmen and their colluding military partners.

National President of the association, Chief Bako Benjamin, who addressed newsmen in Lagos alongside top executive of the association today, Monday, said that majority of Nigerians are unaware of the calamity and atrocities that have befallen Jukun people in the last four years, adding that the nation’s press does not pay enough attention to report to the world the silent ethnic cleansing and genocide ongoing in southern and central Taraba.

He said that rather than lampooning Danjuma for his candid view which he said, was coming after a thorough analysis of the situation, the Nigerian military should have launched an investigation into the weighty allegation and fish out her culpable members.

JDAN, he said, demands for a Commission of Inquiry to look into several cases of atrocities, human rights violations and banditry committed by some security forces in Jukunland  against the innocent people, who are being killed by herdsmen, whose homes and farmlands are being burnt with wanton impunity and whose lives means virtually nothing to the very people who have sworn to defend them and the nation against aggression.

Addressing reporters in Lagos, on developments in some parts of the country, especially Taraba State, the group’s President Benjamin Bako said the retired general was speaking exactly the minds of his people and out of frustration. He said Danjuma statements was a reflection of what presently goes on in Taraba and elsewhere around the middle belt, where several villages and town have been sacked and indigenes chased away by Fulani herdsmen who invaded their communities with the full backing of security operatives.

Rather than carpet our revered elder statesman, the Jukun people have been anxiously waiting for the time when Fulani herdsmen who have killed entire villagers in our land will be arrested and paraded. We are peace loving people, but our people are being arrested in our land and been killed by those who otherwise came for pasture for their cattle.

He said parading Jukun youths on Sunday, barely 24 hours after Gen Danjuma’s criticism of their handling of their roles for taking pictures of the ongoing violence in their land, is simply exposing the ugly underbelly of the Nigerian military and heir complicit in the whole tragic saga unfolding in Taraba State, adding that where that is the case, the people would be left with no choice than to defend themselves.

“We are anxiously waiting for when Fulani herdsmen that have killed and wiped off entire villages in our land would be paraded. We have not travelled to anybody’s land to look for trouble, but our people are been arrested in our land for snapping pictures,” Bako stated.

See also:  My Wife Did Not Even Know She Killed Her Kids, Husband Of Kano Woman

“What Jukuns expected”, he said, “is for the Nigerian military and the federal government to launch an investigation into the weighty allegations that  General Danjuma raised not to be beating about the bush in denials without substance.”

He alleged that there are widespread reports of glaring bias and nepotism by the Nigerian military’s Operation Ayem Kpatuma particularly in Takum and Ussa local government areas since they arrived.

For example, there was no single presence of Fulani herdsmen in the two local government areas for over a year now since their last mass killings of our people, which saw them abandon the area and flee until the soldiers arrived on the same day with them in the name of Operation Ayem Kpatuma.

“No sooner had they arrived in the peaceful communities that burning of houses and killings resumed. As if that’s not enough, the soldiers went about unleashing a campaign of terror and intimidation against Jukun people, breaking into homes and confiscating hunting dane guns, cutlasses, bows and arrows, and left the Fulani herdsmen fully armed with their weapons to continue their campaign of terror in the countryside.”

We have evidences where severally attempts by our youths who were driven out of their villages to defend their communities against the herdsmen by soldiers until the herdsmen are done.

“Jukun Development Association of Nigeria (JDAN), is eagerly waiting for a commission of inquiry into the atrocities that was committed against our people in Takum and Ussa local government areas to  clear the good name of the Nigerian Army and bring the collaborators and perpetrators to book,” Bako insisted.

Benjamin observed that close to 50 villages in southern and central Taraba exist only in name as Fulani herdsmen has wiped out the indigenous population and are presently commandeering the villages.

He said persistent plea on the government to come to the rescue of the people have fallen on deaf ears and atrocities got worse with each passing day.

“When operation Ayem Kpatuma was launched by the federal government, Jukun people jubilated and thought their misery has come to an end, only to discover that military operatives of the program started arriving together with thousands of Fulani herdsmen that had fled the area previously with their cattle.

“Our fear was confirmed when no sooner they arrived in the peaceful communities that burning of houses and killings resumed. [myad]