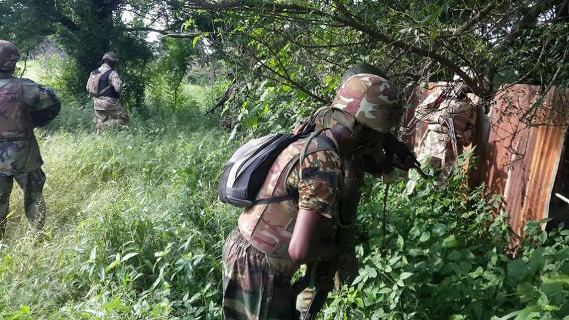 Kaduna state Commissioner for Internal Security and Home Affairs, Samuel Aruwan has confirmed that the security agents have cleared the Lawal Kwalba camp in Chikun Forest in the State.

In a statement today, August 18, the Commissioner said: “Troops have made further inroads in the ongoing campaign against terrorists and armed bandits across the state. The troops cleared the camp of a notorious bandit, Lawal Kwalba, in Rafin Dawa in the Dende general area of Chikun local government.

“According to the operational feedback, the troops of Operation Forest Sanity conducted a patrol to the location following actionable intelligence. The troops after clearing the camp recovered some batteries and 27 bags of fertilizer. These materials indicate likely plans to manufacture Improvised Explosive Devices (IED), considering the bandits’ close alliance with terrorists.

“Furthermore, one motorcycle and two mobile phones were recovered as the bandits took to their heels before the troops’ arrival. The troops extended the search a short distance from the camp, and made some arrests. Investigations are ongoing on the intercepted suspects.

“The Kaduna state government received the report with satisfaction, and praised the sustained efforts by officers and men carrying out the operations.

“Security agencies have reported that three persons were rescued by troops conducting patrols around Ungwan Namama, along the Zaria-Kano road. The troops came in contact with migrating bandits in the area and engaged them, forcing them to abandon their three captives as they hastily escaped.

“The troops then rescued the victims, identified as follows: Abdullahi Lawal, Sadiya Salimanu and Fatima Salimanu (Sadiya’s 10-month-old child). Investigations revealed that the captives were kidnapped in a neighbouring state. Also recovered from the bandits were nine rustled animals, comprising one cow and eight sheep.

“The Kaduna state government thanked the troops for their valiant action in rescuing the kidnapped victims. The rescued persons have been reunited with their families, while the recovered animals were handed over to local authorities for proper identification and retrieval.