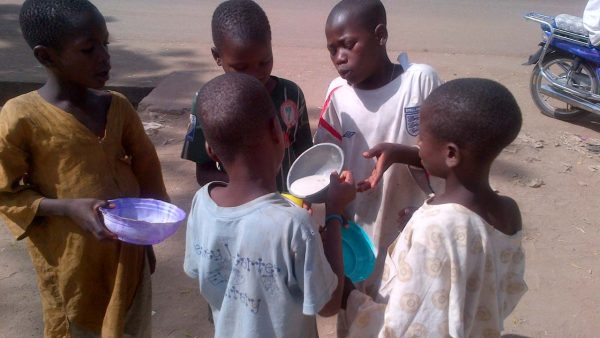 The Kano State Governor, Dr. Abdullahi Umar Ganduje has confessed that the State has the highest number of Almajiri in the country.

Speaking to newsmen today, January 14 at the Presidential villa, Abuja, the governor complained however that most of the Almajiris are not indigenes of the State.

He said that because such none indigenes are guaranteed by the Constitution to live anywhere they wish to, his government had evolved a police of free and compulsory education for them.

“Yes, we have the highest number of Almajiri children in Nigeria. But let me tell you, we have taken a statistics.

“Most of these Almajiris are not indigenes of Kano state and as Nigerians, they are free to live anywhere they want in this country.

“But what is important, we have introduced free and compulsory primary and secondary education in Kano state. “We have built many Islamiya schools. We have reformed the Almajiri system of education. And also, we have embarked on repatriation of Almajiri back to their respective states, some even to Republic of Niger, Republic of Cameroon.

“But as you will know, unless there’s a universal legislation, preventing the movement of school aged children from one state to another, it is a problem that will continue to be here for a long time because Kano is a commercial nerve centre of the Northern part of this country and also a commercial nerve center of some West African countries.

“So, you can imagine people coming to earn their livelihood. They usually come with children, but we have enacted a law.

Any parent that does not put his child into school will be prosecuted.

“So, now, we have established a whole agency that is now evacuating the Almajiri to their respective states. And those who are in Kano enjoy the free education facilities.

“So,  that is the effort we are making. But as I told you, unless there is universal synergy, especially among the northern states governors, where there is legislation preventing the movement of Almajiri from one state to another state, Kano will continue to bear this problem.”