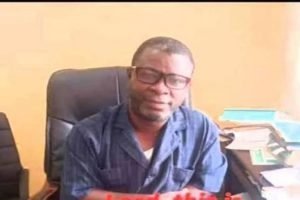 Kidnapped lecturer at the Ondo State University of Science and Technology (OSUSTECH), Okitipupa, Professor Gideon Okedayo, has been found dead.

Information had it that his decomposing body was found on Sept. 9 in the bush, where his abductors held him.

Professor Okedayo of the Department of Mathematical Sciences and Acting Dean of the School of Postgraduate Studies in the university was kidnapped on September 5 at Akoko Junction on the Igara-Auchi road, together with his driver on their way to Edo State.

The Chairman of the OSUSTECH Chapter of the Academic Staff Union of Universities (ASSU), Dr Dipo Akomolafe, confirmed Professor Okedayo’s death in an interview with News Agency of Nigeria (NAN) today, September 10  in Okitipupa.

He said that ASSU and the university community had been thrown into disarray and were saddened by the development.

“His decomposing body was found in the bush. This is so sad to ASUU and his family members because the abductors never called anybody, whether ASUU or Okedayo’s family for ransom.”

The spokesman of the Edo State Police Command, Chidi Nwabuzor, a Chief Superintendent of Police, did not pick several calls made to him on the development.

The Edo State Police Command had earlier announced that it had recovered Okedayo’s official vehicle, a Toyota Corolla car with registration number, 06X47OD.