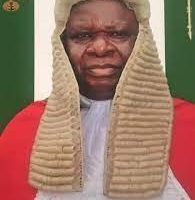 A concerned citizen of Kogi State, Ismaila Isa has drew the attention of the Chief Justice of Nigeria to the alleged falsification of the date of birth by the currently serving President of Kogi Customary Court of Appeal, Justice John Bayo Olowosegun.

In a petition addressed to the Chief Justice, Ismaila also alleged that Olowosegun never did National Youth Service Corps (NYSC), neither did he have certificate of exception from such Service as required by the law before he began his working life.

The petitioner, who provided some documents to support his claim, said that the aim of Justice Olowosegun is to elongate his retirement time.

He explained in yet another statement to the media that Justice Olowosegun was supposed to retire in 2021 but that with his newly concocted age, he will retire in 2024, adding: “such act constitutes an offence which in legal parlance is called perjury and is punishable by long years of jail.

“The case becomes even more odious when committed by an officer of the judiciary who ought not only to personify and and model the best human character traits but also understand the position of the law on such a malfeasance.”

Full text of his petition to Chief Justice of Nigeria is reproduced below, with the response of Justice Olowosegun at the tail end of the write up:

A REMINDER ON THE NOTICE OF ALLEGATIONS OF FALSIFICATION OF AGE AND FRAUDULENT MANIPULATION OF OFFICE AGAINST THE HOLDER OF THE OFFICE OF HONOURABLE PRESIDENT, KOGI STATE CUSTOMARY COURT OF APPEAL, HON. JUSTICE JOHN BAYO OLOWOSEGUN.

You may recall, my noble Lord, that I have earlier submitted petition to you on the 6th of May, 2021, bothering on the above subject matter.

It is interesting to know that the Hon. Justice John Bayo Olowosegun who finished his University programme in 1985 and his call to Bar in 1986 never Partook in the National Youth Service Scheme. One of the grounds for exemption, which is the situation in the case at hand, is if a person is 30 years of age and above. However, all that is required to clear the air on this score is to present his NYSC exemption certificate, which will clearly show that he had already clocked 30 years in 1986. The implication of the following is that we have 35 years from 1986 to 2021, making the current age of Hon. Justice John Bayo Olowosegun to be 65 as against 62 that he claims. It is equally interesting to know that the Hon. Justice did not indicate it in his Curriculum Vitae that he served.

More importantly, aside the curriculum vitae prepared and signed by the Hon. Justice, in which his age as the time he started work at the Federal Civil Service was put at16, there are documents, as attached, a year 2009 memo, in which a former Chief Judge, Hon. Justice Umaru Eri and Former Late Chief Judge, Hon. Justice Nasiru Ajanah, submitted the nomination of qualified persons to fill the vacant space of judges in the state’s judiciary to the National Judicial Council, which clearly states the date of birth of Hon. Justice John Bayo Olowosegun to be 28th  February, 1956.

Accordingly, Hon. Justice John Bayo Olowosegun, having attained the statutory retirement age of 65 years on the 28th February, 2021, ought to have retired by now.

However, if his fraudulently revised CV is allowed to stand, it will mean that he has three more years in office. He would have successfully gamed the system if this happens.

My Lord, if this anomaly is not corrected, it could bring the judiciary to disrepute in no small measure, making the image and integrity of the Arm of Government questionable whilst at the same time exposing it to ridicule.

With these points, which can easily be verified, it is hoped that the National Judicial Council will swing into action to establish the true situation and follow up with necessary actions.

To avoid manipulation of justice, it is advisable that the Hon. Justice John Bayo Olowosegun be sent on compulsory leave so that he does not have undue influence on the course of Justice.

Responding to a WhatsApp enquiry put across to him by our Editor-In-Chief in respect of the petition and press statement, Justice Olowosegun simply said that all the allegations are false.

He wrote on June 5: “Grateful for your kind consideration and thoughtfulness. The allegation is false and unfounded.

“By the ethics of our profession, we are prohibited from giving press conference as l cannot defend myself through the media but only the NJC. Once again, am grateful for your professionalism and integrity.”