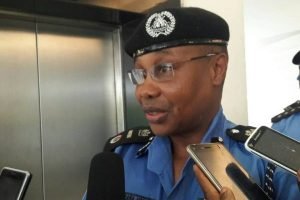 Kogi State police command has detained four of its officers who allegedly behaved like “armed robbers” as displayed in a trending video clip on WhatsApp platforms.
The Inspector General of Police (IGP), Usman Baba had earlier today, October 17, ordered an investigation into the matter, which reportedly took place today.
The officers, ASP Isah Barnabas, Inspector Ifediegwu Godwin, Sgt Emmanuel Ochima and CPL Umameh Mathias, where shown in the video as forcing a passenger on Okene-Adogo road in Kogi State to withdraw N25,000 from an ATM for them.
The video which went viral in other social media, showed that the officers removed their uniforms, changed into civilian dress and march their victim, who was said not to have committed any offence, to the nearby ATM where they forced him to withdraw the amount.
The person who did the video gave his name as John Akinfehinwa. He showed one of the police officers shouting on top of his voice, menacingly displaying his gun.
The video maker claimed that another person who was a fellow traveller was physically assaulted by one of the men in uniform.
In a statement immediately, the spokesman of the Force Headquarters, Abuja, Frank Mba, quoted the IGP as having ordered investigation into the matter, even as the Kogi State Police Command commenced investigations.
A statement by the Kogi Police Public Relations Officer, DSP William Ovye Aya said the State Commissioner of Police, CP Idrisu Dauda Dabban, condemned the incident.
He confirmed that the officers involved have been identified and detained at the State Criminal Investigations Department.
“The Assistant Superintendent of Police (ASP) has been issued an official query while the three other junior officers are currently undergoing orderly room trial (Police internal disciplinary actions).”
The statement said that the Command is doing its best to establish contact with the victims. He enjoined the victims to reach out to the Command thorough 08107899269.
He assured that any of the officers found wanting in the investigations would be dealt with accordingly.
The officers, who are attached to Adogo Division were on patrol duty along Adogo-Okene road at the time the incidence happened.