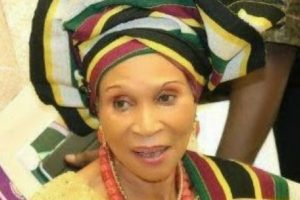 President Muhammadu Buhari has said that the former Nigeria’s Minister of Commerce and Industry, Otunba Ayora Bola Kuforiji-Olubi, who died on Saturday at the age of 80, will be remembered for redefining the place of womanhood in Nigeria’s development.
In a condolence message to her family, issued by his special adviser on media and publicity, Femi Adesina, the President, who recently received the deceased in audience at the Presidential Villa, Abuja, the deceased, described her as the banking and accounting guru.
He said that, Kuforigi-Olubi, who was the first female President of the Institute of Chartered Accountants of NIgeria, served her nation and humanity with all her God-given strength and talent.
“As a distinguished economist and manager who scored many firsts in breaking the glass ceiling in both private and public services, the President believes that Otunba Kuforiji-Olubi.”
President Buhari described the multiple professional, national awards and fellowships which she received during her life time as well deserved.
Dr. Kuforiji-Olubi died on Saturday morning in Lagos.
Buhari, as a military Head of State, appointed her the first female Chairman of United Bank for Africa.
She served in various capacity locally and internationally. She was the 25th president Institute of Chartered Accountant of Nigeria, the first female to become president of the Institute; while she was in the office she launched Accounting Technicians Course 1989–1990.
She was the first Nigerian woman to be Chief Executive Officer of a multinational company (VYB Industries Limited, with British affiliates (incheape & Co Plc) and first female Chairman of a public quoted company (Bewac Plc).
kuforiji chaired and served on the boards of many other companies.
She the first Chairperson of Ogun, Osun River basin development (1976–1980), member governing council Nigerian Institute of Social and Economic research (NISER) from 1981–1983.
She had separated from the father of her children who is late, but kept the Kuforiji name in the interest of her children and as, indeed, she is legally entitled to so do. She later met Chief Daniel Adeyanju Olubi who was an administrative manager in one of the companies she held sway in, married him and, in her most popular and successful days, became known as Chief Mrs. Bola Kuforiji-Olubi.
Her husband, Yanju, a good friend of late Chairman of the Yoruba Tennis Club and leading architect of his time, Kingsonian, Arc. John Seyton Macgregor (AKA JSK) of the iconic and dynastic Lagos Macgregor family who took immensely to him and enhanced Olubi’s initiation into the Yoruba Tennis Club.
Kuforiji-Olubi later separated from Chief Olubi and has been living a happy retired life caring for her children, Tokunbo and Joke and their children in her massive riverside mansion on Marine Road Apapa while surrendering the management of her real estate holdings to her children. [myad]