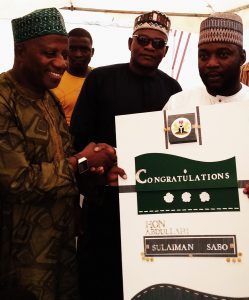 Chairman-elect for Kuje Area Council of the Federal Capital Territory (FCT), under the Peoples Democratic Party (PDP) in the last election, Alhaji Abdullahi Sulaiman Sabo has expressed joy that no one can claim to be instrumental to his electoral victory except God.

“I always believe that God chooses whom He will to be the leader, and I had been contesting for the chairmanship of Kuje Area Council believing that if God wanted me to win, I would one day win. Now, I thank God that I have won.” 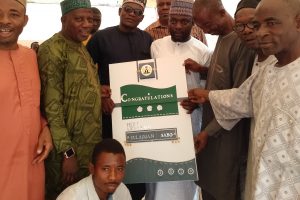 Alhaji Abdullahi Sulaiman Sabo spoke today when he received in audience at his Kayarda residence, members of Ebira Vonya Association Kuje (EVAK), led by its President, Alhaji Yusuf Ozi-Usman. The group had gone to congratulate him on his electoral victory after his fourth attempt since 2007. Sabo defeated the incumbent chairman, Abdullahi Usman Galadima of the All Progressives Congress (APC).

The chairman-elect said that he had no reason not to serve the people of the Council with the fear of God, because he had been blessed by the same God.

He also thanked God for making his party PDP to acquire enough majority in the legislative arm of the Council, adding that with them, he would bring the much needed structural development to the Council.

He sought for the support and cooperation of the people in the Council for the good of all, even as he appealed to EVAK members to always avail him with useful advice on how to move the Council to the next level.

The EVAK President, Yusuf Ozi-Usman had earlier promised on behalf of Ebira community in Kuje of adequate support and cooperation for the success of the new chairman.