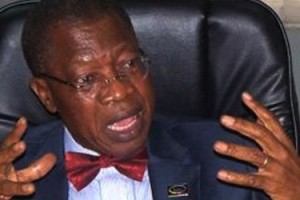 Nigeria’s Minister of Information and Culture, Alhaji Lai Mohammed will head for London on December 9 to engage a panel of experts how to tackle corruption as part of the ongoing How-To-Fix-Nigeria series, organized by The Royal African Society and Oya Media in partnership with the Africa Research Group.

Lai Mohammed, as a minister under President Muhammadu Buhari’s government, has been vocal in his insistence that corruption must be tackled head-on across all levels of society if there is any hope of reviving the country’s economy.

A statement by the organizers said that the event will hold at King’s College London, saying that audiences in Nigeria and globally will join the discussion via the event’s livestream channel.

The statement said that at the event, the panel will debate the effectiveness of domestic efforts to tackle corruption, as well as the broader global picture.

How To Fix Nigeria is conceived and hosted by award-winning broadcaster Funmi Iyanda. The series brings together a broad range of speakers to discuss practical solutions to Nigeria’s contemporary challenges, and engages audiences online via the hashtag #HowToFixNigeria.

The Panama Papers leak highlighted that corruption of the scale seen in Nigeria has only been made possible by a network of offshore secrecy jurisdictions and tax havens – many of which are overseen by the UK and directly benefit certain British interests.

See also:  I Have No Complain About Being Arrested By EFCC - Rochas Okorocha

The statement said that from public awareness campaigns, to registers of beneficial ownership and the demand to return stolen assets held in British banks, there are a range of approaches proposed to addressing the problem of corruption.

“This interactive discussion will assess the foregoing and other approaches, with commentary from experts and questions from the live audience at King’s College, London.

“Nigeria has recently seen several major scandals in which billions of dollars have been stolen at the highest levels. Transparency International’s 2015 Corruption Perceptions Index ranked Nigeria at 136 out of 175 countries.”

The organisers recalled that in the face of recession in Africa’s largest economy, Buhari said: “if Nigeria does not kill corruption, corruption will kill Nigeria.”

They said that since coming to power in 2015, the President has embarked on an energetic anti-corruption campaign, which critics argue has mostly targeted his political opponents.