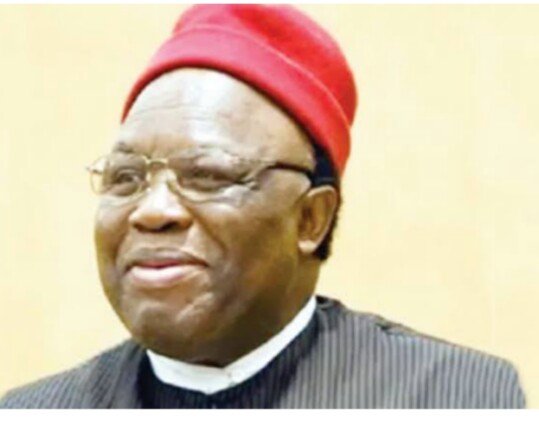 President Muhammadu Buhari has expressed deep sense of loss on the death of Professor George Obiozor, the President General of Ohaneze Ndigbo, worldwide.
In a condolence message today, December 29, Buhari described his death as an immeasurable loss to the country.
He said that Professor Obiozor, who was Nigeria’s Ambassador to the United States, High Commissioner to the Republic of Cyprus, Ambassador to the State of Israel and former Director-General, Nigerian Institute of International Affairs (NIIA) exemplified leadership skills and values as a thoroughbred diplomat.
Buhari acknowledged the late diplomat’s determination in actively embracing the ideas geared towards uniting Nigeria beyond geo-political considerations.
The President recalled fond memories of meeting Professor Obiozor on several occasions where he displayed endearing sense of patriotism.
The President said that the contributions of the unique leader and strong proponent of peace and a stable polity, who also held other strategic public positions, will never be forgotten.
President Buhari praised the former diplomat who he described as a statesman that commanded great respect among his peers in the academia and foreign policy arena.
Buhari extended heartfelt condolences to Obiozor’s family, the government and people of Imo State as well as Ndigbo, at home and in the Diaspora.
He prayed for the peaceful repose of the soul of the deceased.