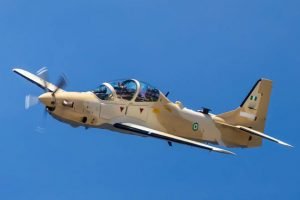 The first batch of A-29 Super Tucano light attack aircraft, ordered from the United States by Nigeria in mid-2018 to strengthen the air attacks on Boko Haram and Bandits have arrived Kano, Nigeria

The A-29 Super Tucano is designed and built specifically for the ‘counter-insurgency mission’ in Nigeria.

The aircraft, according to a statement by the Nigeria Air Force Director of Public Relations and Information, Air Commodore Edward Gabkwet, in a statement today, July 22, touched down Kano airport today at about 12.34pm.

In April last year, Embraer and SNC announced the completion of the inaugural flight of the first of 12 A-29 aircraft.

The full fleet of A-29 Super Tucano aircraft was manufactured by SNC and Embraer at the Jacksonville facility in Florida, US.