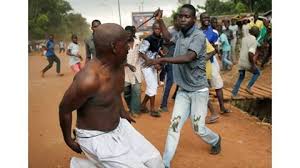 A man considered to be mentally imbalance, whose name was given as Gaji Adamu from of lube village of kwaya kusar local government area of Borno state was said to have invaded Jafi primary school premises in Kwaya Kusar town and matcheted two male pupils to death.
Report from the area said that one of the teachers and one female pupil were wounded in the attack even as irate youths were said to have overpowered the suspect, beat him to unconsciousness and has since been admitted in hospital under protective custody.
report had it that the corpses and injured have been evacuated to Gombe general hospital.
This was even as the commissioner of police, Damian A. Chukwu has directed the Divisional police officer of Kwaya kusar Division to transfer the suspect to the State Criminal investigation and intelligence department (CIID) for a discreet investigation as well as to determine his mental state.[myad]