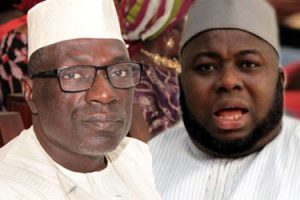 Makarfi also described Dokubo’s allegation that he voted for the candidates of the All Progressive Congress (APC) and that he displayed the ballot paper, as uncivilized lie and an attempt at character assassination.

In a statement in Abuja today, Sunday by Mukhtar Sirajo, his spokesman, Makarfi said: “ordinarily, this is a statement we shouldn’t dignify with a response, but realizing that sometimes uncontroverted falsehoods have a way of taking a life of their own and also knowing that it is not beyond some unscrupulous politicians to splash mud on the integrity of others in order to gain undue advantage.

“In fact given that Makarfi is not an obscure politician, having been Governor of Kaduna State for eight years and following that up with another eight at the Senate and capping those up leading the PDP at a very tumultuous period which was characterised by acrimonious leadership struggle; isn’t it amazing that this could happen in 2015 and be buried till now?

“Moreover, from 1999 to 2015, Senator Makarfi, never skipped voting in any election; yet he has never been reported by any medium to have ever displayed his ballot paper to advertise his preference. We leave this judgment to the people.

“Senator Makarfi has remained a PDP man to the core, sticking with the party through thick and thin and maintaining his faith in it even at a time when defection was the easy way out.

“He has never hidden his gratitude to the PDP for the platform and opportunity it has afforded him to become what he has become and has never, for a second, on account of any slight he felt he suffered or for any other reason, even toyed with the idea of abandoning it let alone teaming up with others to bring it to ruination.”

“While anyone had the rights to pursue any legitimate undertaking, political or otherwise, “including pitching his tent with any politician or tendency, but those do not include the fabrication and peddling of lies to impugn the integrity of others.

“And it is our desire and hopes that we all close ranks and collectively confront the challenges ahead,” the statement read.

Makarfi called on all PDP leaders, members and supporters to “maintain their eyes on the ball, by refusing to be distracted from the returning to power in 2019

“This we can do only by ensuring that we play politics of issues and forging a united front, without compromising decency, respect and love for our party and country.” [myad]