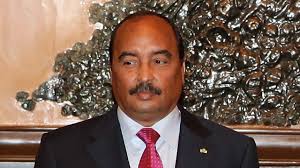 President Goodluck Jonathan has congratulated the newly re-elected President Mohammed Ould Abdulazeez of Mauritania who was sworn in for his second term in office on Saturday 2 August in Nouakchott, the country’s capital. President Jonathan was represented at the swearing-in by the Nigeria’s Federal Capital Territory Minister, Senator Bala Mohammed.
The Minister delivered President Jonathan’s congratulatory message to President Abdulazeez at the ceremony which took place at the Mauritanian National Stadium, Nouakchott.
Presidents and Heads of Government of several countries, including those of Gambia, Chad, Senegal, Mali, Niger, Guinea and Sudan attended the swearing in ceremony.
President Jonathan’s representative was received on arrival at the Nouakchott International Airport by the Mauritanian Minister of Foreign Affairs. He was accompanied on the visit by the Minister of State for Foreign Affairs, Dr. Nurudeen Mohammed, the Permanent Secretary of the FCT, Engr. John Chukwu and the Nigerian Ambassador to Mauritania, among others.
After the swearing in ceremony, President Jonathan’s representative was granted a brief audience by the host President.
Senator Bala used the opportunity to congratulate the Mauritanian President on his re-election and wished him a successful tenure.
He noted that the relationship between Nigeria and Mauritania has been very cordial. [myad]