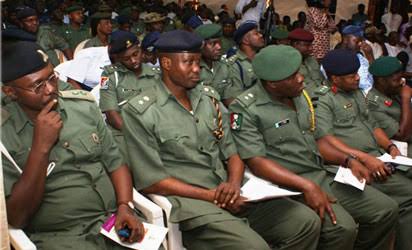 The Citizens’ Initiative for Security Awareness (CISA) is angry with media commentators and Civil Society Organisations (CSO) over what it called blowing discontent and acrimony in the Armed Forces.

He insisted that the activities of some insidious groups are targeted at destabilizing and distracting Nigerian military’s battle against insurgency and other sundry criminalities.

The group was reacting to a statement credited to an orgnisation that alleged ill feelings within the ranks of the military and capable of nurturing sabotage and even mutiny because of the position of Army Chief and Defence Intelligence Chief coming from course 37 while Course 36 officers were allegedly relegated and moved to the Army Resource Center.

The group said that while it would not begrudge or discourage individuals and group from expressing their views about the conduct of military operations, it cautioned CSOs and the media against offering their platforms for the peddling of unsubstantiated allegations or advancement of ulterior motives.

“The natural question to ask the fellows who made the reckless allegations are as follows: what are the yardstick with which the performances of the Chief of Army Staff, Lt Gen Faruk Yahaya and the Chief of Defence Intelligence, General Samuel Adebayo assessed? What was the intention in singling both of them out for excoriation when they spent less than a year on their current positions? How long have they been in the office to earn them such bad reviews? Why should the two military officers be subjected to this grand blackmail and propaganda.

“What was the essence of trying to pitch the top echelon of our military against the other based on their Courses? How is working to distract the leadership of the military in bringing about the much needed results in the battle against terrorists and bandits? When the petitioners claim that the experience of members of 36 participants has been relegated and that it will nurture sabotage and mutiny, what exactly do they mean? Are they directly or indirectly inciting sabotage and mutiny in the system?

“In what ways are the so-called Civil Society Organisations helping the system by openly encouraging and giving oxygen to inter-service and inter-agency rivalry, in the manner of their press statement? In general terms, how did their intervention help in boosting the morale and fighting spirit of our gallant troops.

“As a civil society group interested in the general security and welfare of Nigerians, and who understands the grave implication of subjecting the military and security agencies to undue politicization and demonization of their leadership, CISA believes that critics of military operations should show objectivity and balance in their analysis and commentaries,” Mukhtar said.

The CISA Scribe said: “For us in CISA, we wish to urge Nigerians, especially those who wish to be identified as civil society organisations, to be mindful of the kind of advocacy or activism they engage in, especially at a time like this.

“It is most unpatriotic, insensitive and treacherous for any so-called CSO to willfully and deliberately offer its platform and legitimacy to be used in fanning the embers of discord or promotion of discontent and acrimony within the ranks of the Nigerian military or any security agency for that matter.

“CISA acknowledges the very challenging security situation in the country but it is not unmindful of the efforts and commitment of the military in stemming the tide. We believe that the time we are in now calls for All-of-the-Nation Approach in confronting the security challenges.

“Every segment of the society is expected to contribute its quota if we must surmount the security challenges. It is no longer acceptable for any group to stay aloof in their comfort zones and be pointing fingers of blame or making wild allegations.”