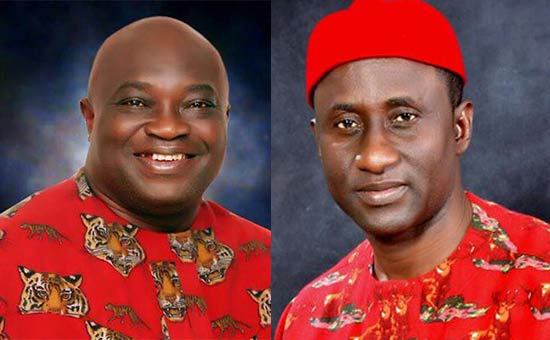 The two judgments were delivered on Friday.

The Abuja Federal High Court affirmed in two separately rulings that the certificate of return issued to Uche Ogah by the Independent National Electoral Commission paving the way for him to be sworn in as Governor of Abia State, was valid.

Justice Okon Abang ruled that the two separate judgments delivered on June 27, removing Onyechi Ikpeazu as Governor of Abia State and ordering Ogah to be sworn in his stead could no longer be stayed since the Independent National Electoral Commission had already issued fresh certificate of return to Ogah.

“Therefore, the INEC lawfully issued Certificate of Return to Dr. Sampson Ikpeazu as it was in line with the judgment of this court.”

The judge made this declaration in two separate rulings dismissing the motions for stay of execution filed by Ikpeazu and the Peoples Democratic Party with respect to one of the two judgments delivered on June 27.

The June 27 judgments were delivered in two suits separately filed by Ogah and one Obasi Uba Eleagbara.

See also:  You Are Not Helping Workers If You Go On Strike, Governors Tell Labour Unions

With regard to the first case (filed by Ogah), the judge ruled that he could not go ahead to hear the motion for stay of execution since lawyers to the opposing parties (Ogah and Ikpeazu) had both submitted that the court no longer had jurisdiction to hear it because the appeal against the court’s judgment had been entered and appeal number issued.

But the court dismissed the motion for stay of execution filed by Ikpeazu with respect to the judgment on the case filed by Eleagbara, on the grounds that it lacked merit.

Though Ikpeazu’s lawyer, Chief Wole Olanipekun (SAN), sought to withdraw the application after the judge refused his request for an adjournment of the hearing on the motion, the judge held that the prayer for its withdrawal was belated since Ogah’s lawyer, Alex Izinyon (SAN) had been made to file a counter-affidavit opposing it.

The judge held that since issues had been joined, the motion for stay of execution was deemed to have been heard regardless of whether it was formally moved in the open court.

Justice Abang also held that since INEC had issued Certificate of Return to Ogah, there was nothing left to be stayed.

That was even as Justice A.I Allagoa of the Federal High Court in Owerri ruled that the tax documents where not forged, and went further to dismissed the matter.

He ruled on the matter filed by Mr. Friday Nwosu against, Ikpeazu, Uche Ogah, PDP and INEC, on alleged forgery of tax documents by Governor Ikpeazu. [myad]