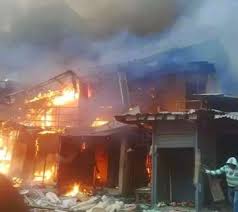 A mother, her three children, a family member and a housemaid have been burnt to death in a fire outbreak at Ibrahim Taiwo Road, Jos, Plateau State, Nigeria.

Residents living in the compound with the victims – the Araf family, said that the incident occurred in the early hours of today, shortly after power supply was restored to the area following an outage the night before the incident.

It was gathered that the fire started from an electric surge which aided the explosion of a gas cylinder in the house, as the victims were held captive due to the fortified security barricade in the house which has only one entrance.

All occupants of the two bedroom apartment were burnt beyond recognition before men of the Fire Brigade Service and residents could render any assistance or extend any help to save them.

The victims all died while the husband was away on official duty.

In line with Muslim tradition, the victims were taken to the mortuary immediately where prayers were offered for the repose of the departed souls and subsequent interment at the cemetery amidst tears.

The Plateau incident brings to fore, the need for citizens to take certain measures in providing security apparatus that will enhance access to buildings while emergency exits should be provided in curbing occurrences of such incidents. [myad]