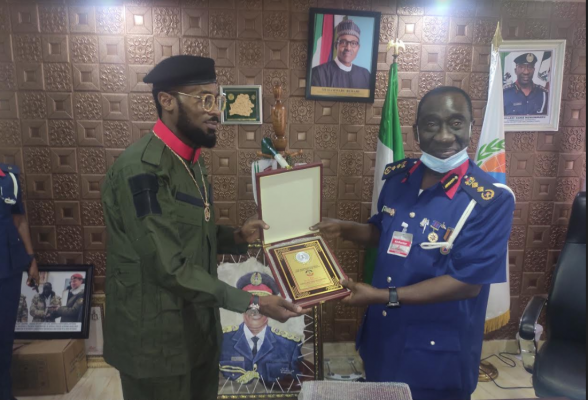 The Agro Rangers is a special unit set up within the NSCDC, called the Agro-Rangers, to primarily protect investments in the agricultural sector and farmers-herders clashes across the country.

In a statement today, August 21,  Ekunola Gbenga, Media Assistant to the Commandant General, said that Agro Rangers is the brain-child of the federal government for the purpose of curtailing herdsmen and farmers conflicts in the country.

The Commandant General, Abdullahi Gana Muhammadu was quoted to have advised the Agro-Rangers’ Ambassador, D’banj to see the honour as a call to service which comes with a lot of responsibilities.

He further advised him to use his talent and popularity to mobilize Nigerians towards unity, peace, tolerance, and productivity.

Gana praised Oladapo Daniel for using his creativity to inform, educate and entertain the populace and mobilize them towards good behavior, as well as best practices and good choices.

“It is, therefore, my firm conviction that with your collaboration, our fighting against insecurity and making lives meaningful for farmers-headers will yield result.”

Gana said that the idea is to spread security awareness and sensitisation to citizens in crime prevention.

In his acceptance speech, Oladapo Daniel Oyebanjo expressed happiness for the unique honor bestowed on him and promised to work with the Corps, especially as Agro-Rangers squad to ensure that farmers return to their farms and operate in peace atmosphere.