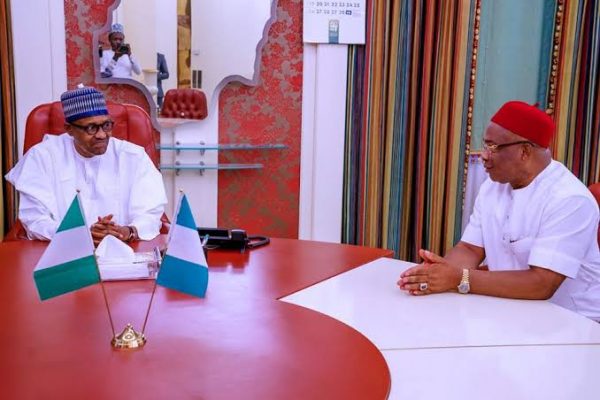 The governor of Imo State, Senator Hope Uzodinma has given a hint that when he constitutes his cabinet shortly,  Muslims will be part of it.
He said: “when I announce my cabinet, you will find that some Muslims will make my cabinet, so the issue of national unity and national integration is uppermost in my mind.”
Governor Uzodinma, who was at the presidential villa, Abuja where he was formally presented to President Muhammadu Buhari by the chairman of the All Progressives Congress (APC),  Adams Oshiomhole, said that making Muslims commissioners in his government is another way “of ensuring that we are all safe.
“Don’t forget I represent a constituency that comprises Muslim and Christians, so the Muslims in Imo state are my friends and we have been working with them for the past eight years in the senate.”
The governor, in answering reporters’ questions said that the issue of food security is very important to his government, saying that he had directed the permanent secretary in the ministry of agriculture to come up with blueprint on agriculture.
“Before I got into
Imo state, they have already passed the budget which has their own priorities and programmes. Of course, most of them are not consistent with the programmes of my own political party on what I think would be better for our state. So, we are now identifying, for instance, the areas we can grow rice, areas we can farm other produce.”
Governor Uzodinma said that the national policies on agriculture are being collated and that there is already a technical committee in that respect.
“You know my deputy governor is former Vice chancellor, University of Agriculture, Umudike, Umohia. So  he is also an agriculturist. He is chairing a  committee to come up with a full programme for agriculture to ensure food security for our people.”
The governor said that he understood the challenges in Imo State, saying that even before now, only few days ago when he got to Imo, he discovered that salaries were not being paid in full.
“The reason being that the money coming from Abuja, the federation account is not sufficient. “What I did was to cut down the running cost and forfeited the security vote donated to the governor. I made up the money and we were able to pay salaries 100 percent to all the civil servants. I also directed that the local government funds be sent straight to the local government until such a time the state is ready to release 10 percent of their IGR (Internally Generated Revenue) to the local government then we can begin to do the business of JAC – Joint Allocation Committee.”
Senator Uzodinma said that for 12 years, no governor visited the civil service secretariat, but that he was there two days ago and water has been been available to the secretariat for the past nine years.
“Two days after my visit, water is running there now: they have been connected back to electricity and the generators are being worked on now.
“So, my mandate is about the people and my government will just be about the people and by the grace of God, I will not disappoint their expectations. I am sure they will see good governance from a man with experience, working in consultations with political stakeholders in the state. I think we can do it differently and the narrative will be acceptable to the people.”
He appealed to Imo people to join hands to build a very strong democracy where equity, justice and fair play will be the order of the day.
He said that having campaigned as a candidate of APC, he had his manifesto built on three Rs – Rehabilitation, Reconstruction and Recovery.
“You will agree with me that with what I have just said happened two days ago, is part of the recovery. We are also trying to design an implementation plan for all those promises we made. In less than three, four days, I will bring out my implementation plan with timelines, God willing, with appropriate funding we will follow that implementation plan judiciously and I am sure the Imo people will be better for it and I will bring prosperity to the people.”
The governor promised to quickly address the problem of insecurity, adding that his government would take courageous and bold decision to ensure that every citizen would have a sense of security.
“If that is addressed, then we will now begin to address the infrastructural gaps.
“When you are talking about priorities areas – education, agriculture these are priority areas. “Then government has no business in business, we will try to introduce PPP – Public Private Partnership, bring private sector investors to also help in growing our economy.
“We are interested in reviving our industries that have gone moribund because of lack of electricity, portable water, access road.”