Home NEWS My Desire To Show My Love For Buhari Made Me To Breach... 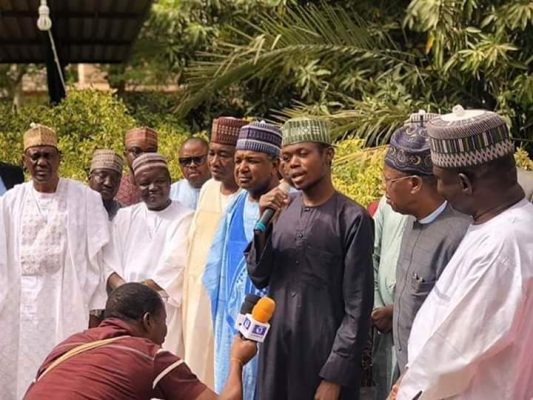 A 30-year old man, Mohamed Gundarre, who was reported in most of the social and conventional media yesterday, March 12 to have attacked President Muhammadu Buhari in Argungu, Kebbi State, has said that he was so excited to see the President he had always loved to meet that he did not know when he charged at him simply to embrace him, thereby breaching protocol.

Reacting to the media reports at a press conference today, March 13 in Birnin Kebbi, Mohamed Gundarre confessed that he had always been emotionally attached to the President’s outstanding virtues of honesty and attempted to shake him when he was prevented by the security.

The man, who is a graduate of Public Administration from Usman Dan Fodio University, Sokoto however apologized for the breach of protocol even as he denied the media report that he was shot and tortured by the security operatives.

“Yesterday was a different day for me because as a graduate of Public Administration who graduated with 2nd Class Lower, It took me a lot of courage and dreams to attempt to get to Mr President despite the fact that there was tight security architecture within the venue.

“I am sorry for the disturbances I caused; it was emotional love I have for Mr. President, the person whom I know is nurtured with integrity and honesty and he is incorruptible and right driven.

“No Nigerian and even beyond has never questioned the consistency and integrity honesty and righteous disposition of the President on either national issue or even his own personal life.

“He has worked as Military Administrator, Minister, Military Head of State and civilian President by all accounts no case of corruption had been attributable to him.

See also:  Those Who Attended APC Presidential Running Mate May Not Be Bishops, But - Amaechi

“From the time he became the President no one has ever questioned whether the national resources was squandered by the President.”

Mohamed Gundarre stressed that he had no ulterior motive when he attempted to move close to the President and shake him during a photo session at the agriculture show, one of the events for the 2020 Argungu fishing festival.

He said that he was simply overwhelmed by the President’s virtues and raved to shake him. ‘Even if I was dead yesterday I would have been contented that I have achieved my mission to move close to Mr. President and touch him one on one.

“You know that emotional love can divert and taint your total faculty of reasoning and that was what really happened yesterday.

“I was told about the misinterpretation of my action in the media although I was not opportuned to view the clip.

“Please, I am alive, the DSS did not torture me. Nobody has tortured me apart from what happened at the venue when I was forced to the car.”

He said that he had met the Kebbi state Governor, Atiku Bagudu in 2010 when he was a Senator and it has not been easy for him to have access to the Governor.

Mohamed Gundarre said that he was not a beggar, though currently unemployed, adding that he is comfortabke and believed in working hard to fend for himself and the family.

“When the DSS got to my house, they even asked me who built the house for me. I have always believed that by struggle I can achieve anything”

He appealed to the President not to derail in his good work at repositioning the country for the better.