Home NEWS My Late Father Made Me Who I Am, FCT Senator Says As... 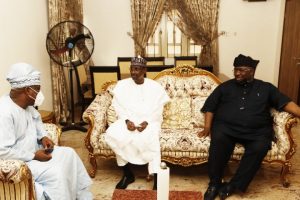 Senator Philip Aduda, representing the Federal Capital Territory (FCT) in the National Assembly, has given credit to his father, Rt. Rev. Tanimu Samari Aduda who died today, October, 20, on the success he has achieved in life.
The Senator, who received the Minister of the FCT, Malam Muhammad Musa Bello that led his team on condolence visit, described his father as a wonderful disciplinarian who put his children on the path of righteousness and was responsible largely for their successes in life.
Senator Philip Aduda expressed appreciation to the Minister who was one of the early callers to the family compound, saying that the visit meant a lot to his family.
“The FCT Minister is the father of the FCT, the Governor of the FCT and the one in charge of the FCT. So, his visit means a lot to all of us and for him to have visited us has made us to be excited because we, as a family in the FCT, we take each other as one. So, we are indeed very grateful and very happy to have received him.”
Malam Muhammad Musa Bello, who was accompanied by the FCTA Permanent Secretary, Olusade Adesola, said that the Aduda family name is an institution in the FCT due to the efforts of the late parents of the Senator.
“Your family is now an institution in the FCT through the efforts of your parents of blessed memory. Your mother was always known and of course your father as well. Many of the people know the name without even knowing the face.”
The Minister expressed his appreciation to Senator Aduda who he said had remained a brother to him since his appointment as FCT Minister.
He prayed for the repose of the soul of the deceased and pledged the participation of the Administration in the funeral of the late clergyman.
The late Rev. Aduda was the Anglican Bishop of the Gwagwalada Dioceses.