Home NEWS NASS Leadership Backpedals On Call For The Sack Of Service Chiefs Over... 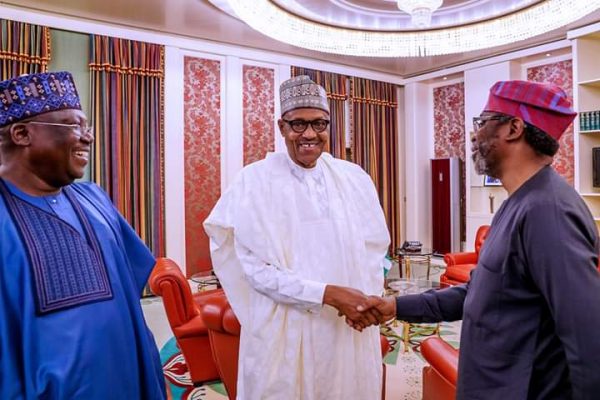 Both the Senate President, Ahmed Lawan and Speaker of the House of Representatives, Femi Gbajabiamila have withdrew the pressure being mounted on President Muhammadu Buhari to sack the nation’s Service Chiefs over the lingering security crisis dodging the country.
Rising from a meeting they had with the President today, February 3, at the Presidential villa, Abuja, the leaders of the two chambers of the National Assembly, admitted that the sacking of the service chiefs would not possibly resolve the security challenges in the country.
Speaking to newsmen separately after the closed door meeting, one of them, Femi Gbajabiamila said: “opinions are divided; the generality of the opinion is that the service chiefs should go, that was evident in our debates in the House of Representatives and in the Senate, but sometimes you don’t want a knee-jack reaction.
“Many of us identify that something drastic has to be done. There’s also the school of thought that says since we are talking about banditry, kidnapping and murders, what have the armed forces got to do with that, anywhere in the world?
“So the question then arises that if he (President Buhari) changes the service chiefs, does that address the issues of kidnapping and banditry?
“The army, navy and air force are outfits set up to tackle external aggression. It is the police that is set up
for internal security, such as we are all witnessing.
“That’s talking about service chiefs. Has the Inspector-General of Police met up with his responsibilities? The question is if we now narrow it to the Inspector General of Police, many will argue that he has done a very good job and many will argue with you that he’s armstrung, straight-jacketed. There’s very little he can do in the face of no equipment, no funding and we explained to Mr. President that we have to increase funding, we have to recruit more.
“We are talking. Even just right now  we have gone on to set up a committee that will periodically review the issue of security, maybe once a month or once in six weeks, which will involve the two arms of government and the party.”
This was even as the Senate President said that one of the numerous things they discussed with the President was the issue of service chiefs, adding: “we believe that it is imperative that we are able to provide those necessary equipment and welfare for the armed forces of this country and the police, to ensure that they are able to operate and performed efficiently and effectively.”
Senator Lawan said that President Buhari is more worried than anybody else about the growing insecurity in the country.
“So, we are on the same page that we should be able to do whatever it takes to ensure that the security agencies are able to perform better than they are doing now.”
He said that in matters of security, the leaders are supposed to lead but that when it concerns security, every single citizen matters.
“So it is for all of us, citizens and leaders to ensure that we are playing our part as it is necessary. But I believe that how the time has come, we have reached a tipping point that everybody in Nigeria is concerned about the security situation and therefore we are all prepared and that is why we have come to meet with Mr. President as leaders of National Assembly on behalf of our colleagues, to discuss the way forward.
“And of course, I believe that citizens participation is critical and crucial.”
The Senate President said that government is looking into technology in the way the security matters are handled.
“We don’t want to divulge everything discussed about security, but I believe that the issue of technology is important. “We need to minimize the casualties of our armed forces and therefore we need to apply technology and become more efficient.
“It is also critical that because we are dealing with human beings, you are asking the military, the police to go and fight insurgents, kidnappers and bandits, you also need to do something for their welfare. How do they live? where do they live? What is the condition of the schools for their children? And so on and so forth.
“So these are issues that are very important and could have very impact outcomes when we are able to do the right thing and we will do them.”