Home NEWS National Honour: Abiola Is Happy In His Grave With Buhari – Late... 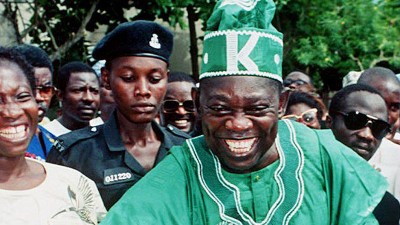 Lisa Olu Akerele, an aide to the acclaimed winner of June 12, 1993 presidential election, Chief MKO Abiola, Lisa Olu Akerele, has said that the national honour bestowed on his boss, especially, the naming of national stadium after him, is an indication that President Muhammadu Buhari has good heart.

Akereke said that the action of the President, who has demonstrated that he a father to all Nigerians, will make the late politician happy in his grave.

He noted that no other head of state had honoured the late billionaire like President Buhari, adding that since Abiola was a lover of sports when he was alive, the national stadium which has been named after him remains the best sporting monument to bear the name of the sport-loving late politician.

He said that it would be wrong for the late Pillar of Sports in Africa to die without a sporting centre named after him in the country despite his contribution for the growth of sports in Nigeria in particular and Africa in general.

“Naming the National Stadium after MKO Abiola is commendable. Apart from MKO’S legendary philanthropy, another area where he excelled was in the sporting arena which earned him the title of Pillar of Sports in Africa.

“President Buhari has truly proved himself as real  ‘Daniel come to judgement’ by rewriting the historical roles played by MKO in almost all areas of national development which some misguided former military officers tried to rubbish in the last 25 years!

“I’m sure that Abiola is happy and will be smiling in his grave now. He has not laboured in vain and his death has also not been without notice. President Buhari remains a hero we should encourage so that he would do more.

” President Buhari must pay attention to sports development by appointing capable hand as the next Minister for Sports and Youths in his cabinet.

“Naming the National Stadium after the late MKO is like affixing the late democracy hero’s name on our nation’s currency, which carry the names of our past heroes like  Obafemi Awo, Nnamdi Azikiwe, Murtala Muhammed, Ahmadu Bello and other.”