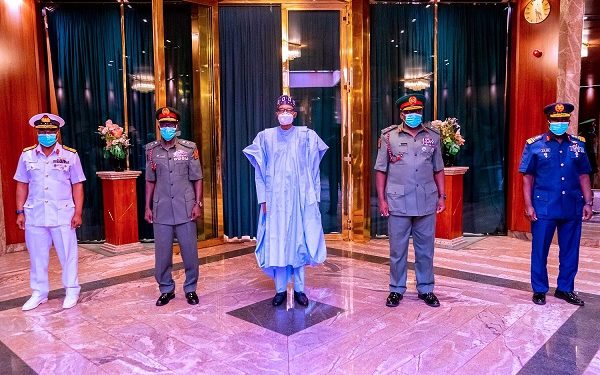 The National Security Council (NSC) has directed the new service chiefs to go out there and reclaim areas that are being dominated now by bandits, kidnappers and other criminals.

Rising from a meeting presided over by President Muhammadu Buhari, today, March 2, at the Presidential villa, Abuja, the Council, mandated the Minister of Defence, to move men and offers towards reclaiming “all areas that have been dominated by bandits, by kidnappers and other scoundrels of scallywags.

Briefing new men after the meeting, the National Security Adviser, retired Major General Babagana Monguno said that the Council directed all the intelligence agencies to collapse all their efforts onto one platform, so that with the convergence of efforts, they would be able to give the required intelligence to the operational elements of government.

The Council, he said, looked at the issue of freedom of citizens to reside wherever they wish to reside as stipulated in the Constitution of the Federal Republic of Nigeria, adding that while the the government endorsed that anybody who is a criminal, who acts on his own outside the law, should be brought to book wherever he is, it would not allow a situation where citizens pitch themselves against one other.

“Therefore, Mr. President has charged each and every one to be mindful of this situation because once we start to profile ourselves along ethnic or religious lines, then there’ll be no end to it. “We’ve seen what has happened in so many countries around the globe, and we do not want Nigeria to fall into that type of situation.

The Council emphasized that no sovereign nation would allow a group of non state actors to bring it down to its knees and render the state in state of panic, apprehension, mistrust, disorder, and so on and so forth.

“Therefore, both the defence and intelligence organizations have been charged that while we look forward to having a peaceful, non-kinetic resolution, we will not allow this country to drift into state failure and from today, the intelligence agencies have been directed to place under surveillance, all non state actors that have been causing problems for the innocent peoples, not just in Zamfara State or the Northwest zone, but also the Northeast and other parts of the country. We have had a lot of reports coming in about collusion with people from all walks of life.”

He said that while the federal government is not averse to the application of non-kinetic means, to resolve this problem, “I need to make it very clear that the federal government will not hesitate to apply to the fullest its kinetic means to restore normalcy to the country. I’m sure you’re all aware of the fact that no country will tolerate a group of non-state actors.”