Home FEATURES Nigeria Has All Attributes Of A Great Nation, But… – President Buhari 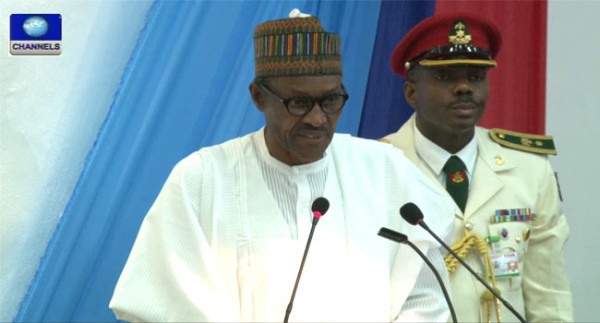 President Muhammadu Buhari has noted that Nigeria has all the attributes of a great nation but for the lack of unity of purpose and cohesion.
“We have all the attributes of a great nation. We are not there yet because the one commodity we have been unable to exploit to the fullest is unity of purpose.”
The President, who addressed the nation this morning via radio and television broadcast to mark Nigeria’s 55th Independence anniversary said that unity of purpose would have enabled the country to achieve not only more orderly political evolution and integration but also continuity and economic progress.
He noted that God, in his infinite mercy, endowed Nigeria, besides being the ninth most populated country on the planet, with arable land, water, forests, oil and gas as well as coastline and solid minerals.
“Countries far less endowed have made greater economic progress by greater coherence and unity of purpose.”
On the Independence celebration, President Buhari said that no temporary problems or passing challenges should stop the citizens from honoring this day, adding: “that we have remained together is an achievement we should all appreciate and try to consolidate. We have witnessed this year a sea change in our democratic development. The fact that an opposition party replaced an entrenched government in a free and fair election is indicative of the deeper roots of our democratic system. “Whatever one’s views are, Nigerians must thank former President Jonathan for not digging-in in the face of defeat and thereby saving the country untold consequences.
“As I said in my inaugural speech, I bear no ill will against anyone on past events. Nobody should fear anything from me. We are not after anyone. People should only fear the consequences of their actions. I hereby invite everyone, whatever his or her political view to join me in working for the nation.
The President maintained that every new government used to inherit problems and that his was not different.
“But what Nigerians want are solutions, quick solutions not a recitation of problems inherited. Accordingly, after consultations with the Vice President, senior party leaders and other senior stakeholders, I quickly got down to work on the immediate, medium-term and long-term problems which we must solve if we are to maintain the confidence which Nigerians so generously bestowed on us in the March elections and since then.
“As you know, I toured the neighboring countries, marshal a coalition of armed forces of the five nations to confront and defeat Boko Haram. I met also the G7 leaders and other friendly presidents in an effort to build an international coalition against Boko Haram. Our gallant armed forces under new leadership have taken the battle to the insurgents, and severely weakened their logistical and infrastructural capabilities. Boko Haram are being scattered and are on the run.
“That they are resorting to shameless attacks on soft targets such as I.D.P. camps is indicative of their cowardice and desperation. I have instructed security and local authorities to tighten vigilance in vulnerable places.”
On power, President Buhari recalled the efforts that have been made so far, saying that there has been improvement in the power supply. He added that supply of petrol and kerosene to the public has also improved throughout the country and that there are early signs that within months, the whole country would begin to feel a change for the better. [myad]