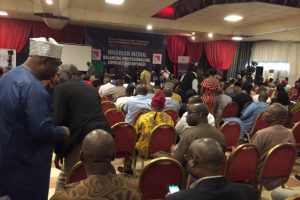 The Nigerian Guild of Editors (NGE) has scheduled its Biennial Convention to be held in Ikeja, the Lagos State Capital from May 3 to 5 this year.

A statement from the Social/Publicity Secretary of the Guild, Ken Ugbechie, said that Vice President Yemi Osinbajo is the Special Guest of Honour even as the Lagos State Governor Akinwunmi Ambode, will be the Host Governor and will declare the convention open.

The statement said that the nation’s Minister of Information and Culture, Alhaji Lai Mohammed will be the  Host Minister  at an event that is expected to be attended by over 300 editors in Nigeria.

It said that the theme of the convention is: “Media Convergence as Strategy for Survival.”

The statement said that the keynote address will be delivered by Professor Abigail Ogwezzy-Ndisika, who is Head of Department of Mass Communication in the University of Lagos. She is also a member, Editorial Board of Guardian newspapers.

“The convention will be chaired by veteran journalist Mr. Dan Agbese, author, columnist and Executive Director of MayFive Media Limited.”

The statement said that a major highpoint of the convention will be the election of new Executive members to run the affairs of the Guild in the next two years after the expiration of the tenure of Mrs. Funke Egbemode-led Exco.

Meanwhile, the Election Committee for the Guild has announced that it had cleared 23 candidates to vie for elective positions into the Guild’s Executive Council and Standing Committee.

The election will hold on Saturday, May 4 after the opening ceremony and it is the first election to be held using the amended 2016 NGE Constitution and Election Guidelines. A statement signed by the Secretary of NGE Electoral Committee, Barr. Gbemiga Ogunleye, in Lagos,  said 23 candidates were cleared for 12 offices.

Those cleared include: Funke Egbemode as Presidential candidate, while Messrs Umar Saidu Tudunwada and Chooks Ogbonnaya Oko were cleared to contest for the office of Deputy President.

For the office of Standing Committee Members (North), the following were cleared as contestants: Catherine Agbo, Julius Idowu, Husseina Bangshika and Umoru Ibrahim.

For the office of Standing Committee Members (East), the following candidates were also cleared: Ngwoke A. Ngwoke, Ikpong Essien-Udom and Freston Akpor.

Those cleared for the office of Standing Committee Members (West) include: Adeleye Ajayi, Steve Nwosu, Eze Anaba and Gabriel Akinadewo.