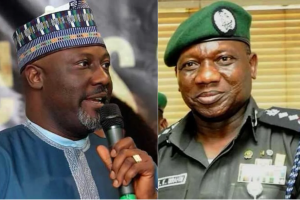 Embattled Senator Dino Melaye, representing Kogi State West Senatorial area has alleged that the Nigeria police is still indebted to him to the tune of N10 million which was awarded him by court about four years ago.

Dino Melaye, who had just come out of detention following bail granted him by Kogi State High Court, took to his Instagram page, saying that his being arrested and detained by the police started about four years ago.

“The Police illegal arrest and harassment did not start now. This was four years ago. Where Court awarded 10 million Naira damage to me that police is yet to pay.

The Kogi State Chief Judge, Justice Nasiru Ajana had granted Senator Dino Melaye bail in the sum of N10 million with one surety. The bail was granted on health grounds.